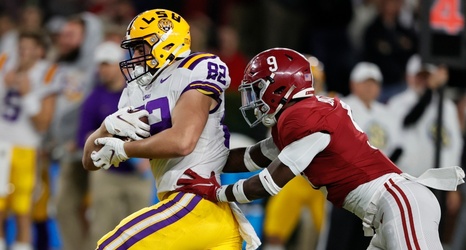 In his six-year tenure as LSU's head coach, Ed Orgeron's finest victory—aside from winning the 2020 national championship game—was his 2019 win over Alabama in Tuscaloosa. In his final game as part of the rivalry, Coach O pulled out all the stops to try to get one more signature win.

After LSU's offense was stopped on third down at midfield during its first drive, Orgeron opted to go the aggressive route and call a fake punt. This wasn't just any fake punt, though; this was a fake punt jump pass. Behold Orgeron's gambit in all its glory:

That majestic pass was pulled off by punter Avery Atkins, who looked more like Stephen Curry shooting a tear-drop runner than a punter moonlighting as a quarterback.