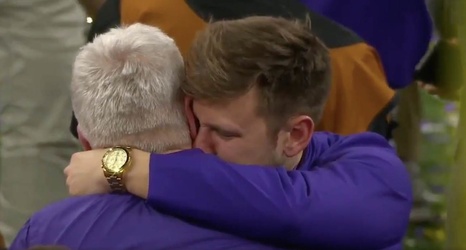 Just over two weeks ago, LSU offensive coordinator Steve Ensminger's daughter-in-law Carley McCord died en route to the Peach Bowl in a plane crash. Ensminger coached later that night, hours after making the hardest phone call of his life: a call to his son Steve Jr.

On the field, after LSU's 42–25 victory over Clemson on Monday night in the national championship, Ensminger shared an emotional embrace with son.

Following their hug, the duo posed for pictures including other members of their family.

As Sports Illustrated's Ross Dellenger wrote after the Peach Bowl, McCord and Steve Ensminger had a joking relationship, "one full of jesting at one another’s expense.