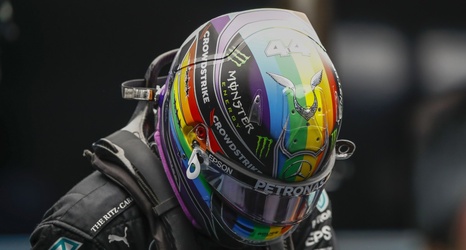 Lewis Hamilton is promoting LGBTQ+ rights on his Qatar Grand Prix race helmet, swapping his usual message "Still I Rise" for the pride flag with the message "We Stand Together."

Formula One's next two races are in Qatar and Saudi Arabia, two countries human rights groups have said use the league to distract from their human rights abuses. Per the Human Dignity Trust, Qatar's penal code criminalizes same sex relationships, and since the country operates Sharia courts, "it is technically possible for men who engage in same-sex intimacy to be sentenced to death."

"I do feel that we're aware there are issues in these places that we're going to, as there are all around the world," Hamilton said in a press conference ahead of the race weekend, per ESPN.