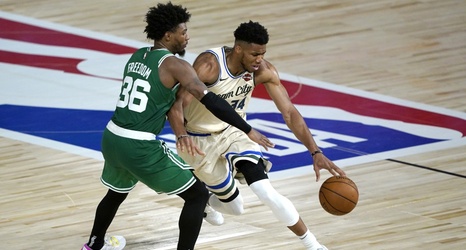 ...says Celtics’ guard Jaylen Brown, who was among those upset with the officiating in their opening-night loss to the Bucks, during which there was an overturned block call and some 50-50 calls that went against Boston.

Late in the fourth quarter of a tied game, after Boston erased an early 15-point deficit, Giannis Antetokounmpo was called for a charge when Marcus Smart slid under the reigning MVP. The call, however, was reversed, and, after Antetokounmpo hit the free throw to complete the three-point play, the Bucks led 110–107 on their way to the 119–112 win (during which Kemba Walker became the NBA’s most expensive cheerleader).