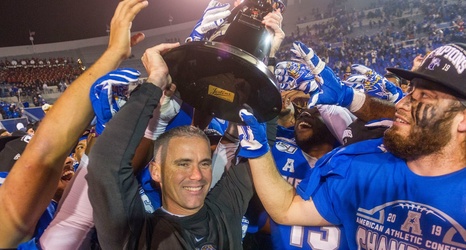 MEMPHIS, Tenn. (AP) — Antonio Gibson caught a 6-yard touchdown pass from Brady White with 1:14 left and No. 16 Memphis defeated No. 21 Cincinnati 29-24 in the American Athletic Conference championship game on Saturday.

The victory marked the first time Memphis (12-1, No. 17, CFP) has won the AAC title in its third straight conference championship game. The Tigers now wait for an invitation to the Cotton Bowl as the highest-ranked Group of Five team.

Eight days after beating the Bearcats 34-24 at home in the regular-season finale, Memphis rallied for another win.

Along with scoring the go-ahead touchdown, Gibson ran for 130 yards, including a 65-yard TD dash.