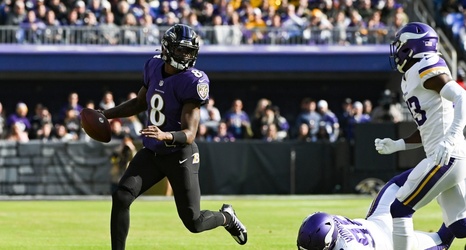 Another week marked another standout performance for Lamar Jackson on Sunday.

Baltimore's signal caller tallied 266 passing yards and three touchdowns in a 34–31 victory over the Vikings, and Jackson added plenty of production on the ground. He finished the afternoon with 21 carries for 120 yards, leading all rushers on the afternoon. As we've seen time and again in recent seasons, Jackson seems to be adding a whole new element to the designation of dual-threat quarterback.

Jackson set an NFL record on Sunday with his latest standout performance. He now has 12 games with 100-plus rushing yards, the most in NFL history.