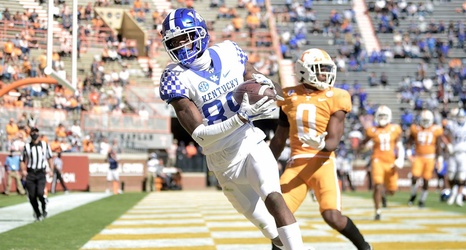 Kelvin Joseph and Jami Davis returned interceptions for touchdowns in the first half and Kentucky shut out No. 18 Tennessee in the second half to bury the Volunteers 34-7 Saturday.

It was Kentucky’s first win in Neyland Stadium since 1984, the Wildcats’ largest margin of victory in Knoxville since 56-0 in 1893 and their most lopsided victory in the series since 1935.

After getting six interceptions and allowing only a safety against Mississippi State last week, Kentucky (2-2) picked off three passes against the Vols (2-2).

Tennessee has now followed up an eight-game winning streak with a two-game losing streak.