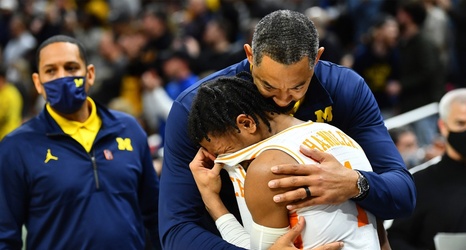 The Volunteers are no longer dancing and the emotions of the realization hit some sooner than others.

No. 3 Tennessee went from winning the SEC championship to losing against No. 11 Michigan in the second round of the NCAA men’s basketball tournament in the span of six days.

Freshman guard Kennedy Chandler, who tallied 19 points, nine assists and four rebounds in the 76-68 loss, started crying in the handshake line, but there was at least one person there to comfort him—Michigan coach Juwan Howard.

He embraced the young rising star in a moment when he could have been celebrating with the rest of the Wolverines.