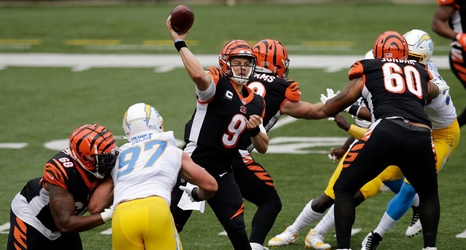 On Joe Burrow’s second series in the NFL, on a first-and-10 from the Bengals’ own 20-yard line, he did something he was robotically familiar with at LSU.

From the shotgun, Burrow stuffed the ball into Joe Mixon’s chest as the two slid toward the line of scrimmage. All the while, he kept his eyes downfield, appearing to key in on Chargers safety Desmond King II. When King committed to the run, Burrow pulled the ball and threaded a dart to A.J. Green for a first down. It was an elemental RPO—run/pass option—play, a brilliant and wildly popular offensive fixture across the NCAA and the NFL that aided Burrow’s rise from unheralded transfer to top pick in the NFL draft.