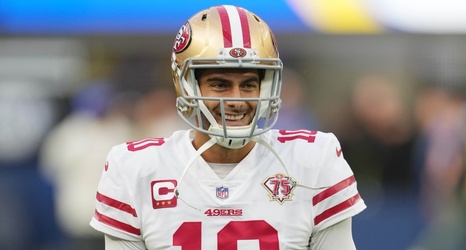 49ers quarterback Jimmy Garoppolo remains “on schedule” in his recovery from offseason shoulder surgery, setting up a planned return to throwing in the coming weeks, according to ESPN’s Jeremy Fowler.

The expectation has been that Garoppolo, who underwent the procedure in his right shoulder in March, will be able to begin throwing again around July 4. That timetable is still on track, per Fowler.

The update is good news for the 49ers, who have been exploring trade scenarios involving Garoppolo since the end of last season. San Francisco general manager John Lynch told reporters on March 28 that the surgery and recovery timeline ultimately gave possible trade partners pause.