Jalen Suggs, No. 1 Gonzaga Cruise Past No. 3 Iowa Despite Hawkeyes' Second-Half Rally 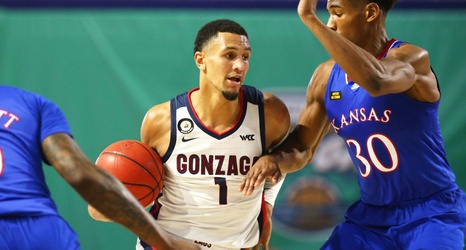 Jalen Suggs finished with 27 points, four assists and seven rebounds as No. 1 Gonzaga and its explosive offense handled No. 3 Iowa, 99–88, on Saturday at Sanford Pentagon in Sioux Falls, S.D.

Suggs, who was 8-of-17 from the floor and 7-of-10 from three point range in the contest, posted 18 points by halftime.

Gonzaga (4–0) led by as many as 20 points early in the second half despite the fact that it entered Saturday having not played in 19 days due to a pause in team activities due to COVID-19.