How Many Receiving Yards Will Kenny Golladay Have in 2020? 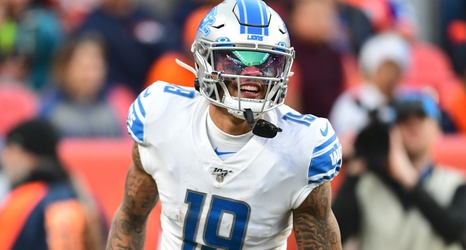 Detroit Lions wide receiver Kenny Golladay has surpassed the 1,000-yard receiving mark the past two seasons and has firmly entrenched himself as an elite wide receiver in the NFL.

The former Northern Illinois standout has become the top target of quarterback Matthew Stafford, with the two establishing themselves as one the league’s top offensive duos.

Golladay had four games with 23-plus PPR (points-per-reception) points with Stafford under center, while his production dipped to just one contest with more than 18 PPR points with the Stafford on the sidelines. If Stafford can stay healthy, Golladay should produce strong WR1 numbers once again in 2020.