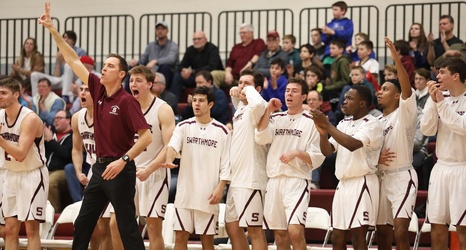 On Saturday night, Zac O’Dell and Nate Shafer were in their dorm alongside their teammates on Swarthmore College’s campus watching the 76ers-Bucks game when the senior co-captains' phones started blowing up. Shafer looked down to see an ESPN update stating that San Diego State had lost at home to UNLV, 66-63. The texts promptly rolled in. “Congrats, you guys are the last undefeated team,” many of them read.

Coming into last weekend, there were only two teams throughout the three divisions of NCAA men’s basketball that had yet to lose a game: SDSU and Swarthmore. The Garnet—by definition a red silicate mineral—are now the only team still undefeated, the lone men’s program to win all of its regular season games.