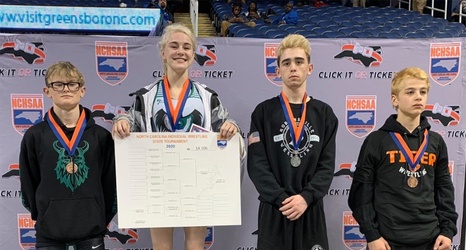 RALEIGH, N.C. — A female wrestler has made history by winning a state high school wrestling championship in North Carolina.

The North Carolina High School Athletic Association said on its website that junior Heaven Fitch of Uwharrie Charter became the first female to win one of the association’s individual state wrestling championships. She won the 106 pound (48 kg) weight class at the 1A division on Saturday.

A photo released on the association's official Twitter account shows her beaming, standing next to three boys who finished behind her in the tournament.