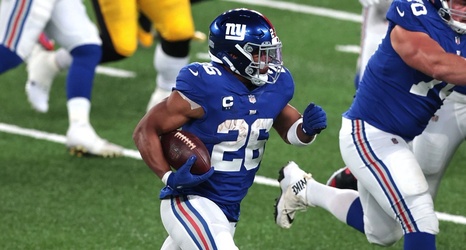 Giants running back Saquon Barkley injured his right knee in the first half of the team’s Week 2 matchup against the Bears. After a short reception, the third-year running back landed awkwardly on his leg and his knee buckled while being taken to the ground.

Barkley immediately tore off his helmet and grabbed his knee while looking to be in serious pain. He was eventually helped off the field by trainers but could not put any pressure on his leg. Judging by Barkley’s reaction and the way he landed, the injury isn’t just a minor sprain but instead likely a form of ligament damage or tear, which would be a nightmare scenario for an already struggling Giants offense.