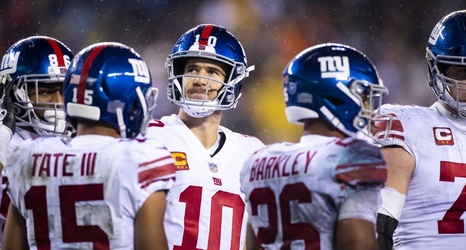 By halftime of Monday night’s game between the Giants and Philadelphia Eagles, it felt as if Eli Manning was a character in a folk tale, a shunted hero who, in a twist of fate, was granted a last moment to rescue those around him.

Manning, for 11 weeks the forlorn servant on the bench, improbably resurrected the star-crossed Giants against the heavily-favored Eagles. On a national television stage where the spotlight always seemed to find him, Manning was everything he had once been. Late in the second quarter, after he threw a sterling, 55-yard touchdown, the usually subdued Manning charged down the field flashing a smile that could not be obscured by a face mask or a chin strap.