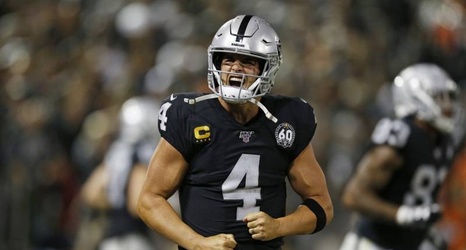 The Oakland Raiders emerged from a drama-filled preseason to win their season opener 24-16 over the Denver Broncos on Monday Night Football.

RingCentral Coliseum was rocking to begin the team's final season in Oakland before the franchise moves to Las Vegas. Sprinkled among cheers for current Raiders were several bouts of "F—k AB" chants disparaging the recently departed Antonio Brown.

In the aftermath of Brown's messy divorce, the Raiders offense rolled behind quarterback Derek Carr's 259 yards, one touchdown and no interceptions on 22-of-26 passing.

Meanwhile, Joe Flacco's Denver debut was mostly one to forget despite posting 268 yards, a touchdown and no interceptions on 21-of-31 passing.