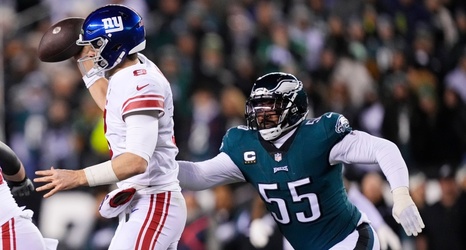 If you’ve watched an NFL “mic’ed up” segment before, you’ve likely seen players saying some pretty aggressive things during pregame huddles, on the sidelines and in the actual game itself. But it’s pretty rare to see such bold talk directly in an opponent’s face right before kickoff.

That’s the strategy Eagles defensive lineman Brandon Graham adopted ahead of Saturday’s divisional round playoff matchup with the Giants. In a video shared by NFL Films’s Twitter account on Tuesday, Graham was chirping up a storm as the two sides met at midfield for the coin toss, setting the tone for what would eventually become a blowout win by Philadelphia.