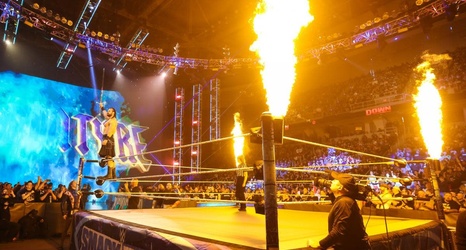 Drew McIntyre is entering the biggest stretch of his WWE career.

The two-time WWE champion is currently starting a new program with Roman Reigns, the undisputed WWE universal champion. McIntyre and Reigns share more than three years of history, and the two big men have made excellent adversaries, with their most memorable matches taking place at WrestleMania 35 following Reigns’s return from a second occurrence of leukemia—and a champion-vs.-champion match at Survivor Series in 2020.

A new chapter in their rivalry will begin at the WrestleMania Backlash pay-per-view Sunday, when McIntyre teams with Raw tag team champions Randy Orton and Matt Riddle in a six-man tag match against The Bloodline, which is composed of Reigns and The Usos, who are the reigning SmackDown tag champs.