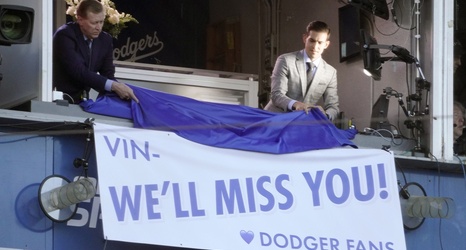 Before their matchup at Dodger Stadium against the Padres on Friday, the Dodgers honored legendary announcer Vin Scully, who died on Wednesday at the age of 94.

The team also put a circular blue patch on the mound with “Vin” written on it, and Dodgers broadcasters Joe Davis and Orel Hershiser uncovered a sign below the broadcast booth that read “Vin - We’ll miss you!