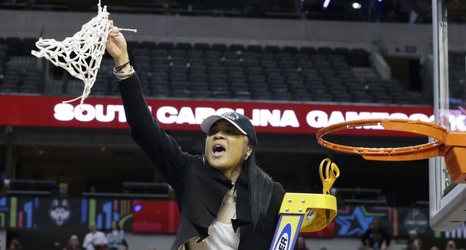 South Carolina women's basketball coach Dawn Staley guided her team to a commanding 66–57 victory against NC State on Tuesday. But winning games is not the only thing the legendary coach has been up to.

To kickoff the 2021 season, Staley kept her promise by sending each Black woman coach in Division I basketball a piece of the Gamecocks' 2017 NCAA Championship net, carrying out a tradition that was started by the great Carolyn Peck in 2015.

Peck, who is now a sports personality for women's college basketball and the WNBA, was the first Black woman to lead a team (Purdue) to win an NCAA Championship, doing so in 1999.