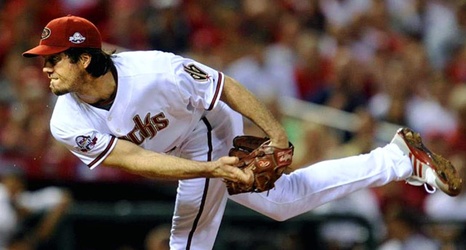 With many of the world's highest-profile athletes chipping in to help the cause against the coronavirus—soccer stars Lionel Messi and Cristiana Ronaldo and former UFC champion Conor McGregor are recent examples—former 13-year MLB veteran has found a creative way to increase his charitable contributions.

Haren's family has already made donations to the Children’s Action Alliance in Phoenix and the Hollywood Food Coalition in Los Angeles. Now, in an attempt to raise money and awareness to his causes, Haren has turned to an unlikely source: his bobblehead collection.

According to The Athletic's Molly Knight, Haren has listed a number of his bobbleheads for auction on eBay.