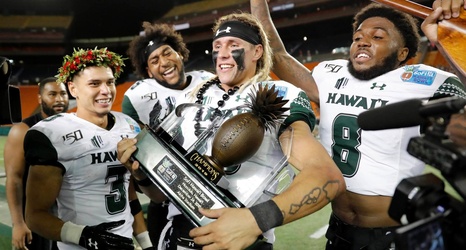 HONOLULU — Cole McDonald capped a stellar performance with a 24-yard touchdown pass to Nick Mardner with 1:17 remaining, and Hawaii beat BYU 38-34 on Tuesday night for the Warriors' first 10-win season since 2010.

McDonald threw for 493 yards and four touchdowns against a BYU defense that was allowing an average of 203.8 yards passing per game.

Still, it took a late rally for Hawaii to beat BYU for the first time since 2001 when both were part of the Western Athletic Conference. After leading 31-24 at halftime, the Cougars (7-6) shut out the Warriors until the final possession.