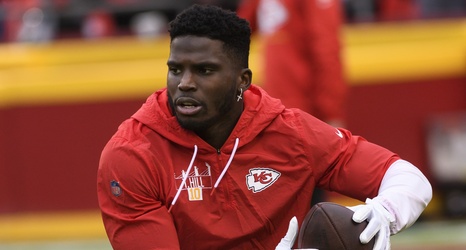 The Kansas City Chiefs will likely have the services of No. 1 wide receiver Tyreek Hill for Sunday's AFC Wild Card Round playoff game against the Pittsburgh Steelers.

Head coach Andy Reid said on Friday that Hill and running back Darrel Williams are expected to play despite heel and toe injuries, respectively, according to ESPN's Adam Schefter. Kansas City will be without running back Clyde Edwards-Helaire, however, because of a shoulder injury.

There was some concern about a heel injury heading into the playoffs, but Hill played all 17 games during the 2021 regular season and has never played fewer than 12 contests in a single year since he entered the league in 2016.