Buddy Boeheim Lifts Syracuse Past No. 18 Virginia in OT 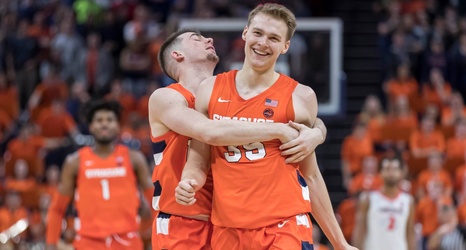 CHARLOTTESVILLE, Va. — Buddy Boeheim scored nine of his 14 points in overtime and Syracuse outlasted No. 18 Virginia 63-55 on Saturday. The Orange scored 20 points in the extra period after netting just 19 in the second half.

Boeheim hit the third of three consecutive 3s for the Orange (9-7, 2-3 Atlantic Coast Conference) and added another when he made a desperate heave from well behind the 3-point line to beat the shot clock late in the extra period.

Elijah Hughes, who scored 18 points, hit the first 3 of the overtime for the Orange and freshman Joe Girard, who scored 19, hit the second.