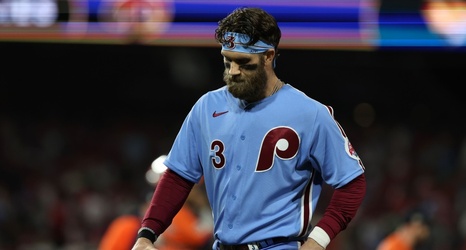 Fresh off a year when he led the Phillies to the World Series and was named the MVP of the NLCS, Bryce Harper has undergone Tommy John surgery.

The procedure was meant to repair his torn UCL in his right elbow, per Jim Salisbury of NBC Sports. He’s expected to be able to resume hitting “competitively” by mid-May.

Harper dealt with the injury all last year, which prevented him from throwing and limited him to primarily designated hitter duties. It didn’t slow him down at the plate, as he batted .286/.364/.514 with 18 home runs in 99 games.