Browns Coach Kevin Stefanski on Benching Baker Mayfield: 'Why Would We Do That' 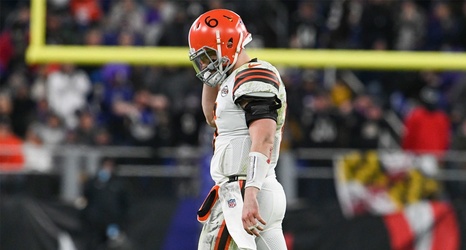 Despite the Browns' recent offensive struggles, coach Kevin Stefanski has no plans to make a change at quarterback.

When asked after Sunday night's 16–10 loss to the Ravens if he would make a change during the bye week and start Case Keenum instead of Baker Mayfield, Stefanski answered, "No. Let me ask you a question, Why would we do that? We're not doing that."

Mayfield completed 18 of his 37 pass attempts on Sunday for 247 yards. He threw one touchdown and had one fumble.

Cleveland has scored just 30 points combined over their past three games and has scored 17 points or fewer in seven of their last nine games.