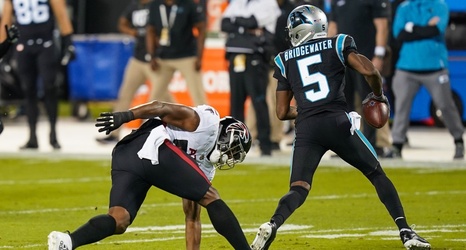 Late in the third quarter of the Panthers' Thursday Night Football game against the Falcons, Carolina quarterback Teddy Bridgewater suffered a blow to the head from Atlanta pass rusher Charles Harris. Bridgewater exited the game and was replaced by backup P.J. Walker, though he eventually returned in the fourth quarter.

Harris was penalized and ejected from the game. The penalty occurred on third down and extended Carolina's drive, which ended with a 39-yard field goal from Joey Slye, cutting Atlanta's lead to 19-17.