As Electrifying As Ever, Nick Kyrgios Shows Why He Could Win Wimbledon 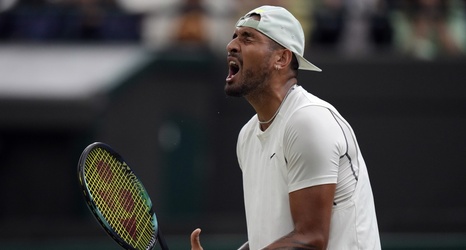 The Australian won a heated match marked by controversy against Stefanos Tsitsipas to advance to the fourth round.

Well, that was entertaining, huh?

After his four-set victory over No. 4 seed Stefanos Tsitsipas on Saturday at Wimbledon, Nick Kyrgios told the crowd, “The media loves to write that I’m bad [for] the sport, but I'm clearly not.”

The match had everything: high-powered serving from both players, trick shots (Kyrgios), arguments with chair umpire Damien Dumusois (from both players) and a fourth-set tiebreak that produced some beautiful tennis.

Sports Illustrated’s Jon Wertheim broke down Kyrgios’s win, which earned the 27-year-old Australian his first trip to the fourth round since 2016.