All Eyes on Justin Herbert as the Senior Bowl Gets Underway 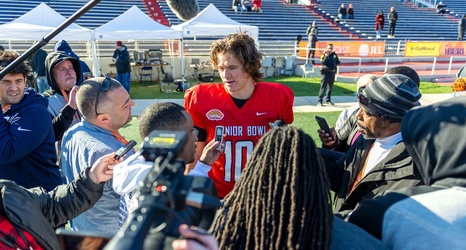 MOBILE, Ala. — When LSU QB Joe Burrow declined his Senior Bowl invitation, Justin Herbert, the four-year Oregon quarterback and Rose Bowl champion, became the player to steal the show this week in Mobile. Without Burrow or Tua Tagovailoa around to divert attention, Herbert has a prime opportunity to improve his draft stock and rise to the top of the Senior Bowl talent pool.

It was just last year when Giants general manager Dave Gettleman fell in love with Duke quarterback Daniel Jones on a sunny Saturday afternoon at Ladd-Peebles Stadium, leading Jones to jump ahead of Dwayne Haskins as the second quarterback off the board.