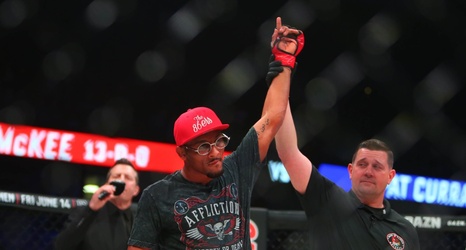 A.J. McKee suffered his first-ever loss this past April. Months later, he is still processing the decision.

“Having something literally ripped out of my hands and taken from me, that hit a little different,” says McKee (18-1), who lost the featherweight title by unanimous decision to Patrício “Pitbull” Freire at Bellator 277. “It hit a couple nerves.”

It wasn’t solely that Pitbull reclaimed the featherweight title and his place atop the division. That could not compare to the blow of McKee losing a goal he spent years dreaming and sweating for, one which vanished instantly upon hearing the announcement of the controversial decision.