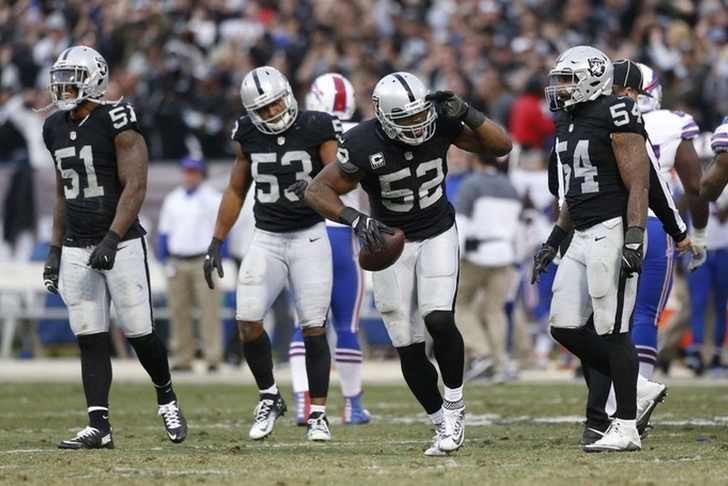 Darius Latham has the starting gig as of now, but I think the Raiders would prefer it if Jihad Ward can prove worth of the role. The position designation might be a bit confusing, but remember that the Raiders use some 4-3 and 3-4 elements. The DE/OLB role for Mack means he's either a 4-3 DE or 3-4 OLB depending on the set-up. The DE/DT role means those players can line up at DE or DT, while the NG/DT role means a player is either a true nose guard or a run-stuffing 1-technique. The Raiders need someone to step up as an interior disruptive. Hopefully, Edwards can stay healthy and be that guy. Vanderdoes has serious potential, if healthy.

The Raiders have not re-signed Perry Riley, but a quick glance at who is on the roster makes it clear they should. Jelani Jenkins is barely making the league minimum, Cory James is a former sixth round pick and yet both are in position to start. If Riley isn't brought back, expect a battle between James, Lee and Heeney for one starting role. Irvin will again handle the strong-side linebacker role in the 4-3 looks, while serving as another 3-4 OLB at times. His backup is clearly Calhoun. Ball has some potential, but he's never been able to stay healthy.

Game-by-Game Prediction of the Raiders' Schedule

Brown is in the mix as well, after a surprising rookie year. He'll find his way onto the field. Lewis is a nickel corner because of his poor size, which means he might not play a ton with Scandrick on the team. White might be in for a redshirt year, before hopefully taking on the Carroll role.

McDonald has the lead for the No. 5 corner role, but he'll be pushed by Hamilton and Durden. Keep an eye on Rutgers UDFA Anthony Cioffi. He could make the team for special teams purposes.

Here's Who The Raiders Signed As UDFAs

The Raiders are in really good shape here. Joseph has a bright future as an in-the-box safety, while Nelson is still a quality free safety. Getting Melifonwu in round two was a steal and he'll play plenty. Don't be surprised if the Raiders use him in a "big nickel" or "big dime" scheme, where they use an extra safety in place of a linebacker. He should help the Raiders out with their tight end coverage issues. Long-term, Melifonwu and Joseph should be the safeties. McGill can contribute at corner as well, while Luani could be a key special teams player early.

The kicking game won't change, as Janikowski, King and Condo are back. But Cordarrelle Patterson is now the favorite to handle returns. He thrived in that role at Minnesota and should in Oakland. He's best at kick returns, so Richard or Washington could get some action on punts.