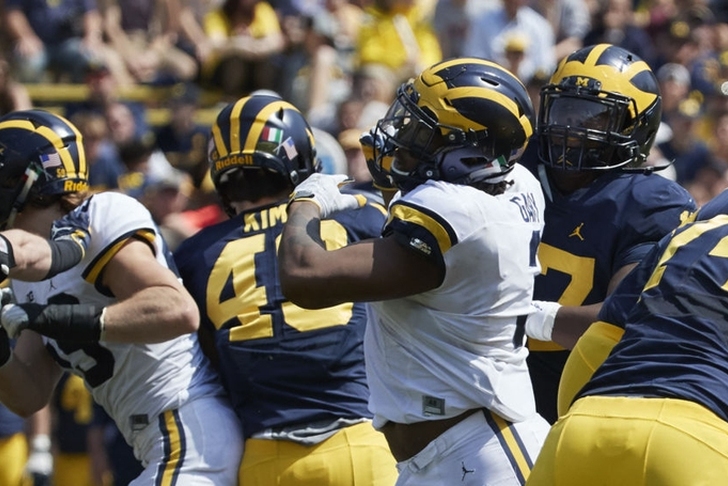 With the losses up front (and really across the defense), the starters of Gary and Winovich should not be a surprise. And the expectation is they'll be good, with the hope Gary becomes great soon. But depth is the key, with Kemp as the clear top backup and potential the only one the Michigan staff is truly confident in. Jones moved down from LB, which could press two true freshmen in Jeter and Vilain into a role early.

Click Here For The Latest On Michigan Football Recruiting

Much like DE, the two interior starters are obvious, with the depth the big question. Dwumfour is still raw and battled injury in the spring, which means this might actually be too high for him. But the rest of the depth is iffy right now. Marshall is moving from DE to DT, while Myers is a backup. The good news is once Solomon gets on campus in the fall, he should at least be the No. 4 DT.

Mike McCray is technically the only defensive starter returning, although several players saw plenty of snaps last year. Hudson will take over the Jabrill Peppers role, with Jordan Glasgow behind him. Glasgow can also contribute at safety. When Michigan wants to go big at LB, Furbush will serve as a true SLB. Devin Bush isn't fully developed, but he'll be counted on to make plays this year. Mbem-Bosse has the edge over Devin Gil and Josh Uche at weakside linebacker.

With so many losses at CB, the Wolverines will have a very different secondary. No one really has a job locked up, although it'd be a surprise if Hill didn't start. Long should be the other stater, but don't rule out Washington and the lanky early-enrollee St-Juste. In the pass-happy world of college football, more corners isn't a bad thing. Watson could be the nickel corner, while Thomas might be a year away from being ready to really contribute.

It's clear youth and inexperience dominate the back end. All four players have potential, but they'll need to thrive early. Kinnel and Metellus could form a strong duo early in 2017 at safety. Glasgow can also play safety if needed.

Quinn Nordon, of sleepover fame, will be the kicker. Hart has the job over Robbins, but only because Robbins hasn't shown up on campus yet. By the end of fall practice, the job could be Robbins'. Johnson and Washington hold the edge on returns, but that could very well any change. Any number of players could get more reps in fall practice, from the RBs to the WRs to incoming freshman.