PHOTOS: We Interviewed The Bros Who Dressed As Magnum P.I., Went To A Detroit Tigers Game And Got Kicked Out 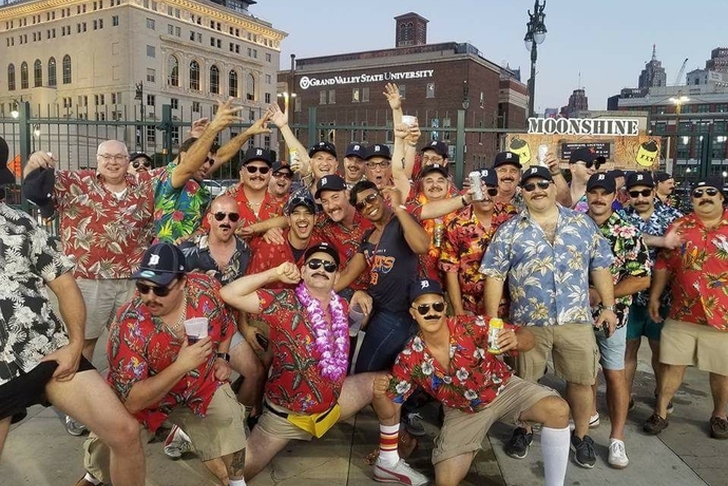 The viral sports fan story of the week has been a bachelor party consisting of 45 dudes dressed up as Tom Selleck in Magnum P.I. who were kicked out of a Detroit Tigers game at Comerica Park. The three Tuccini brothers, Chris, Joe and Gabe, were the ring-leaders of the Magnum PI Bachelor Party and they sat down with Chat Sports for an interview and provided numerous photos.

The interview will be aired on the Cam Rogers Show live on the Chat Sports Facebook page at 10:30 a.m. ET Wednesday, with the three brothers detailing how the event came together, why they were kicked out of Comerica Park and the details behind everything.

Our interview and photos are below: 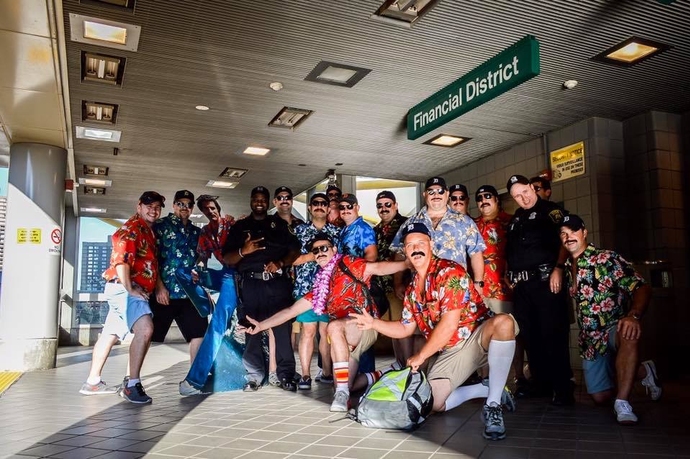 Chat Sports: How did this all come about?

Tuccini Bros: "Joe is the last brother of us (to get married) that’s why "Tuccini last stand" is what we called it. We’re all married except for Joe, and we all had epic bachelor parties. And we wanted to send Joe off with the most epic bachelor party. We threw around some ideas, Chris’ wife came up with the idea of dressing up as Magnum PI. And it just kinda snowballed from there. We came up with the idea of going to a Tiger's game and yeah." – Gabe

Tuccini Bros: "The perfect combination of simple costume and really great idea. Anybody can throw it together It was amazing."  – Joe

Tuccini Bros: "Hey real quick, are my balls showing? Let me get rid of them." – Chris 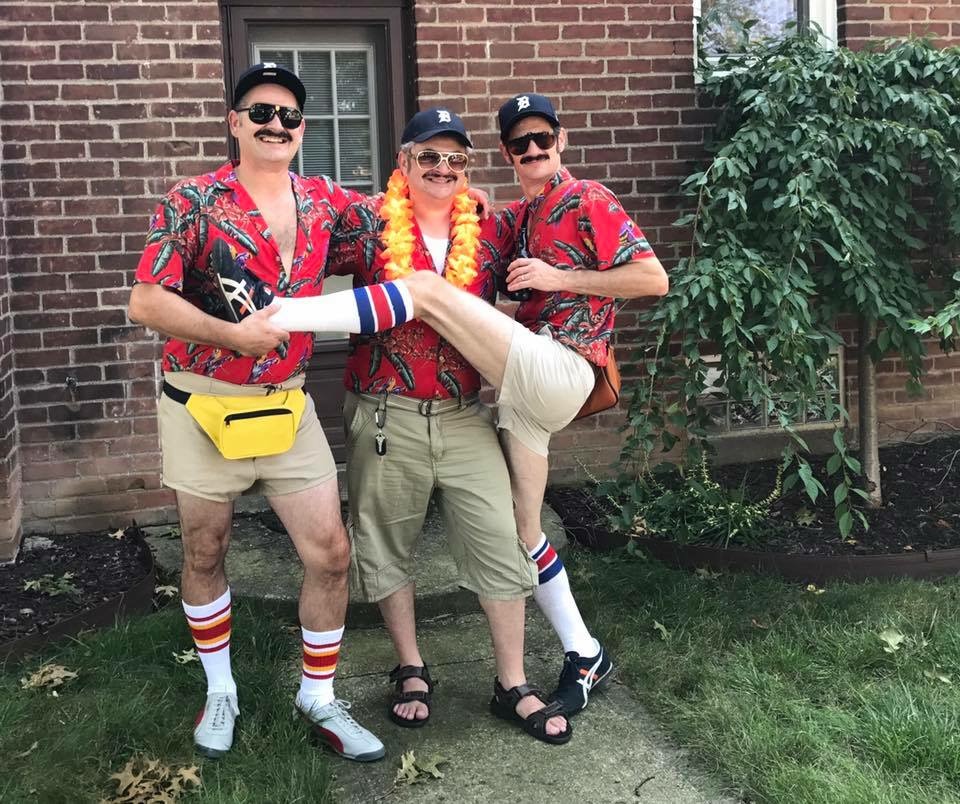 Chat Sports: There were 45 of you, how many of you grew actually mustaches.

Tuccini Bros: "I would say at least half had real mustaches, about half of us. We'd like to bring up our sponsor, Just for Men, Mustache dye ... The kicker is it makes your mustache look thicker." - Chris 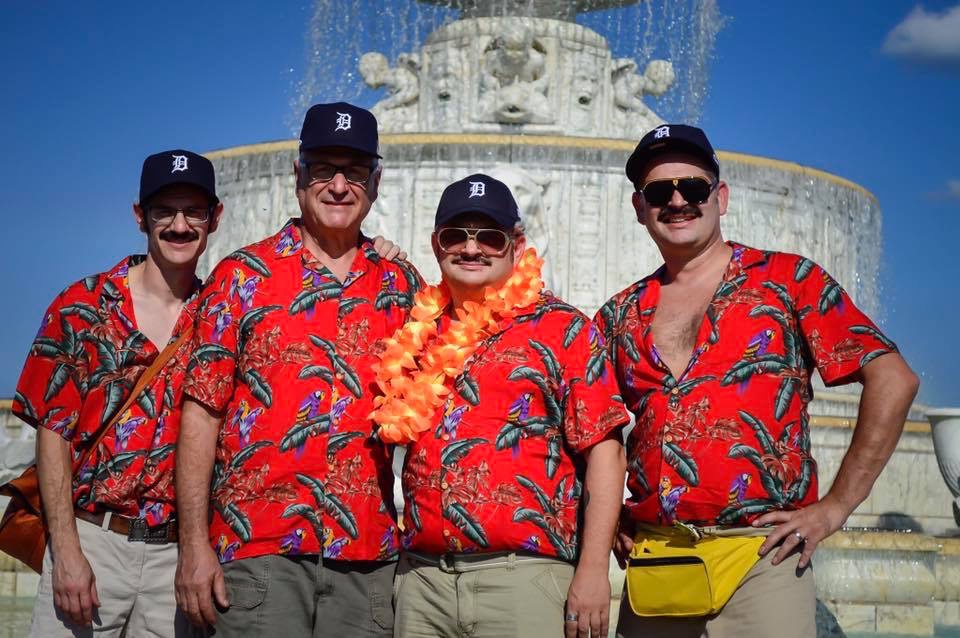 Tuccini Bros: "The Star Wars was thing was a pure coincidence. We needed a Saturday night, it just kinda happened. Also, I've dressed as Magnum P.I. before, because I’ve got a beautiful freaking mustache going here. But it’s kinda my gag, so once we all threw this together, everyone started pilling on. In fact, we had people at the bachelor party who met Joe that night. And actually, we had 52 people pay. Only 45 showed up. It’s not in the news, but only 45 Magnums were visibly seen in regular costumes. But there were hundreds more undercover. They didn’t know that, we’re masters of disguise. We were lucky to get only 45 thrown out." - Chris

Chat Sports: There's the Tom Selleck cutout, how much did that cost you?

Tuccini Bros: "Okay that's probably the best 100 dollars I’ve ever spent in my life. I Went online, my creative juices were really flowing with this one. I really love my brother, been a great brother my whole life ... I had real hair mustaches from Bangladesh we were gluing on people. The magnum cutout we got from a cutout shop in Brooklyn. We hired a TC look-alike to drive the bus." - Chris 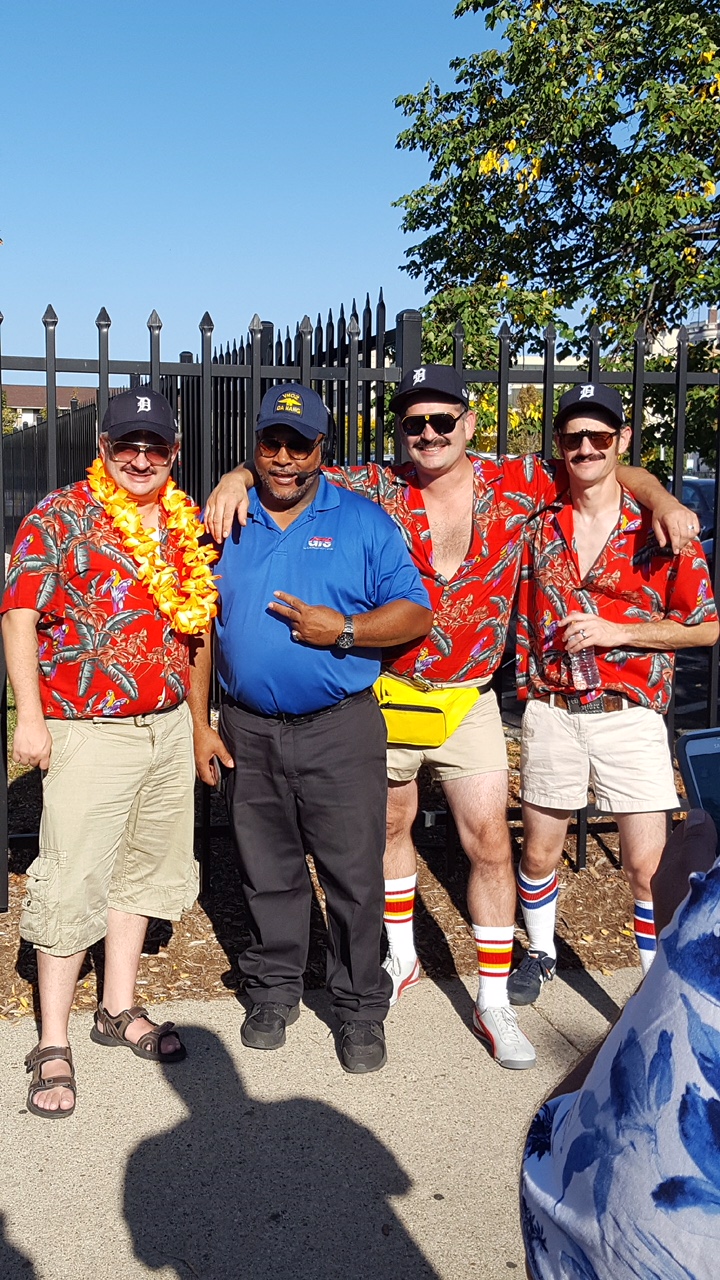 Chat Sports: Rumor was that someone tried to take the Tom Selleck cutout - what happened there?

Tuccini Bros: "That was pretty funny. After we got kicked out, the Detroit police officer was nice enough to go back into the park and get out Tom Selleck cutout and bring it back out to us. Bumping it to us, pumping us up. And then there was a rowdy group that got kicked out right around there, grabbed it, took off running. He got tackled real quick by a couple of magnums and put to the ground and we rescued him, brought him back to the fold. No Magnums left behind."  - Gabe 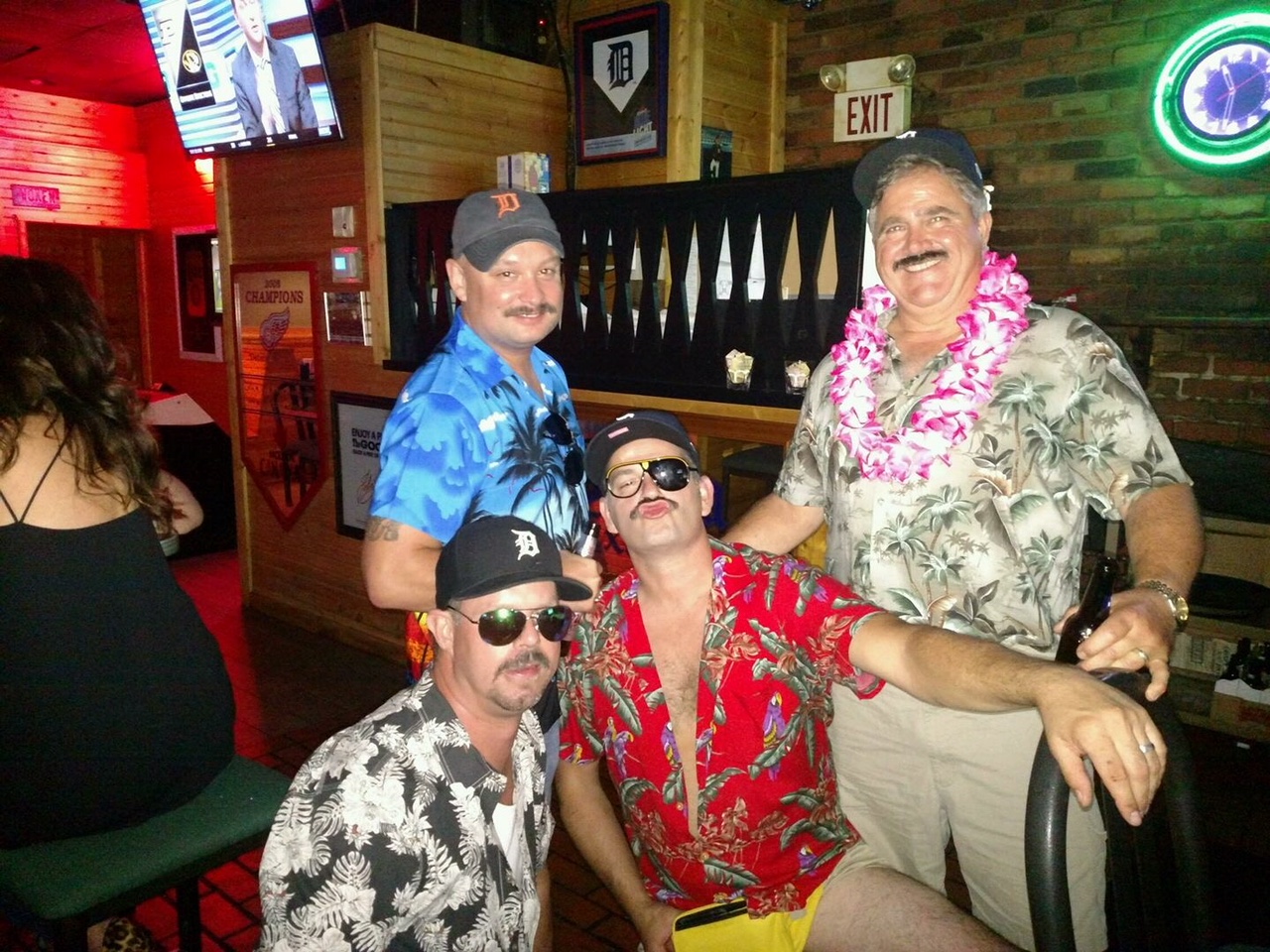 Chat Sports: What happened before and after the Tigers game? Anything fun you want to share?

Tuccini Bros: "We had a really great time. Started drinking around noon, had a mustache dying party around 12:30ish, 1 o'clock. We all got on the bus around 2, had a bunch of pizza and calzones and went to Belle Isle. We took pictures around the fountain and there were multiple weddings there taking photos. They came over and wanted pictures of the all the magnums. Then we took a little stroll through downtown, through Campus Martius and jumped on the people mover, which was hysterical. The look on those poor people’s faces when all that man meat walked into that people mover." - Gabe

Tuccini Bros: "Best part was we had a Bluetooth speaker playing the magnum theme the whole time." – Chris

Tuccini Bros: "It was outstanding. We had a photographer with us the whole time taking some great shots." – Gabe

Tuccini Bros: "It was pretty mellow though. We didn't do anything that wasn't PG-13." - Chris

Tuccini Bros: "There were no fights, nothing broken, no one got hurt, no one got arrested. We had a good time. A little too much fun for Comerica Park, I guess." – Joe

Listen to the Tuccini brothers interview Wednesday at Noon ET on iTunes on The Cam Rogers Podcast!

Chat Sports: What was the amount of alcohol that the average Mangum consumed?

Tuccini Bros: "We had 30 cases of beer and it was all gone. Then we had like some half gallons of booze. Jameson, Maker’s Mark, Absolute, Patron, Crown Royal. We weren’t messing around. What we did was charged everyone accordingly and part of the gift is that we bought Joe a Shinola watch from all of our 45 Magnums." – Chris 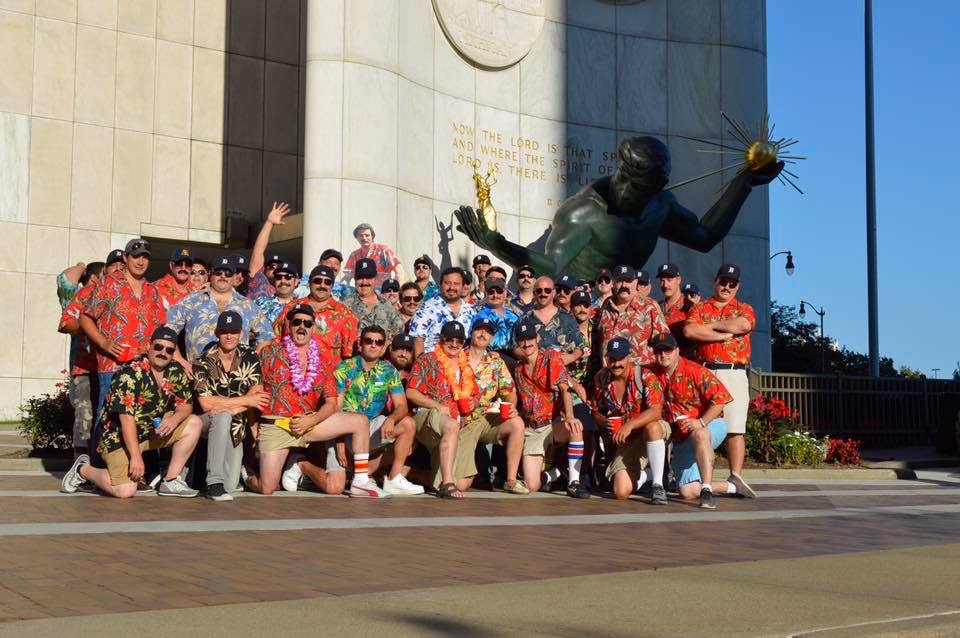 Chat Sports: What happened that resulted in you guys getting kicked out of the Park?

Tuccini Bros: "Okay, so there was a lady who had a hard-on for kicking us out. Someone was smoking and she came over, yelling and screaming and then we were cat-calling. I was looking at the group from the side. I was talking with one of the other magnums at the fence, watching the game, kind of mellowing out and said 'what are they possibly gonna kick us out for?' And right as I said that, I heard the big jeers from everyone over there 'Who wants free mustache rides?!?' And I said that’s gonna get us kicked out. Right there, that phrase is gonna get us kicked out."  – Gabe

Chat Sports: Is there anything you guys want from the Tigers?

Tuccini Bros: "Our demands are really quite simple, sir. We want 45 invites back to the park in a suite hosted by Tom Selleck. I don’t really think that’s too much to ask, considering the circumstances." – Chris

*Note: The Tigers did not reply to a call for comment before this article was published*

Chat Sports: Chris, a couple of questions for you in particular. Your Facebook page refers to you as Chris Doucheccini Tuccini. My first question is why did your parents hate you so much to give you that middle name?

Tuccini Bros: "That's not my given middle name. I've earned that middle name. You don't get to pick your own nickname and I am Doucheccini."

Chat Sports: These do not sound like positive smells.

Chat Sports: Chris, it says on Facebook that you studied 'fighting, farting and fucking' at 'Fuck College Street Knowledge.' First question, where is that located?

Tuccini Bros: "I thought we were keeping it PG." - Chris

Chat Sports: This is Facebook, the FCC can't do anything.

Chat Sports: I was unfamiliar with this college. I regret not applying. Would you recommend this college?

Tuccini Bros: "Absolutely I would. Talk about real-life situations. Something you're actually gonna do. What are you gonna study? Freaking old art from Egypt? Let's talk about things we're gonna do every day of our life, or hopefully. 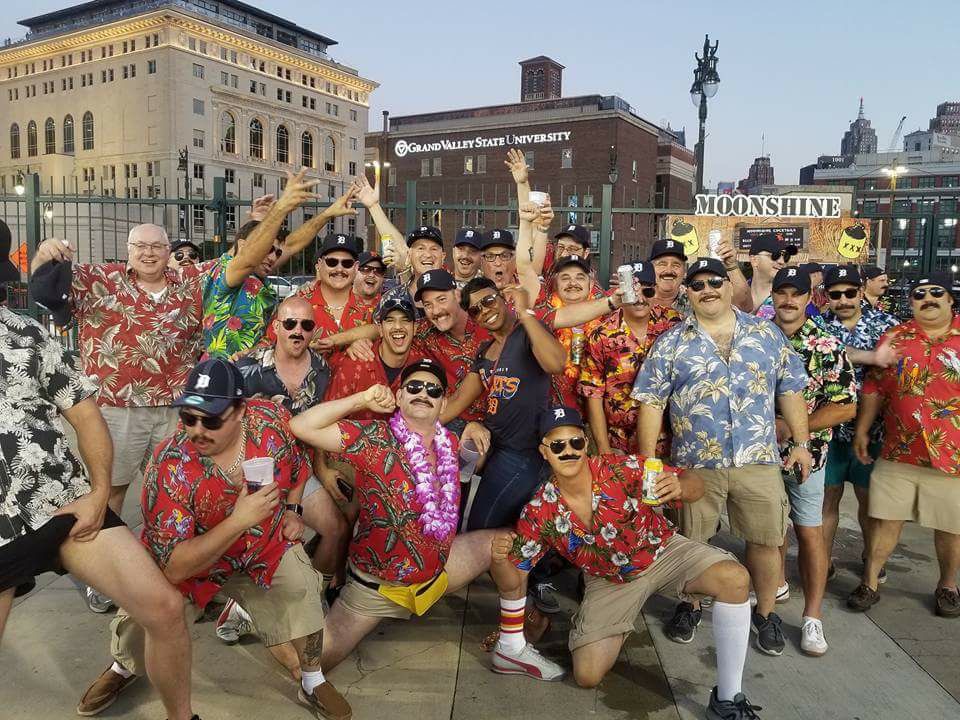 Chat Sports: Have you guys peaked? Is this your peak moment in life?

Tuccini Bros: "Oh no. no. We are on our way up. Skyrocketing. Feel like a rising star, really …" - Chris

Chat Sports: So how do you top this?

Tuccini Bros: "Next year it’ll be 450 magnums going to Comerica Park. See them try and throw 450 out."

Listen to the Tuccini brothers interview Wednesday at Noon ET on Google Play on The Cam Rogers Podcast!

Chat Sports: Where did this love for Magnum P.I. come from? It takes a deep-seated love to get 45 people to dress up as Magnum P.I.

Tuccini Bros: "Well, we’re kinda know for throwing pretty good parties. And any theme we can come up with we can get people to go with. For my bachelor party, we had 56 guys in vintage tuxes." – Chris

Chat Sports: Have any of you actually met Tom Selleck before?

Tuccini Bros: "No. Hoping we do at the suite in Comerica Park." – Chris 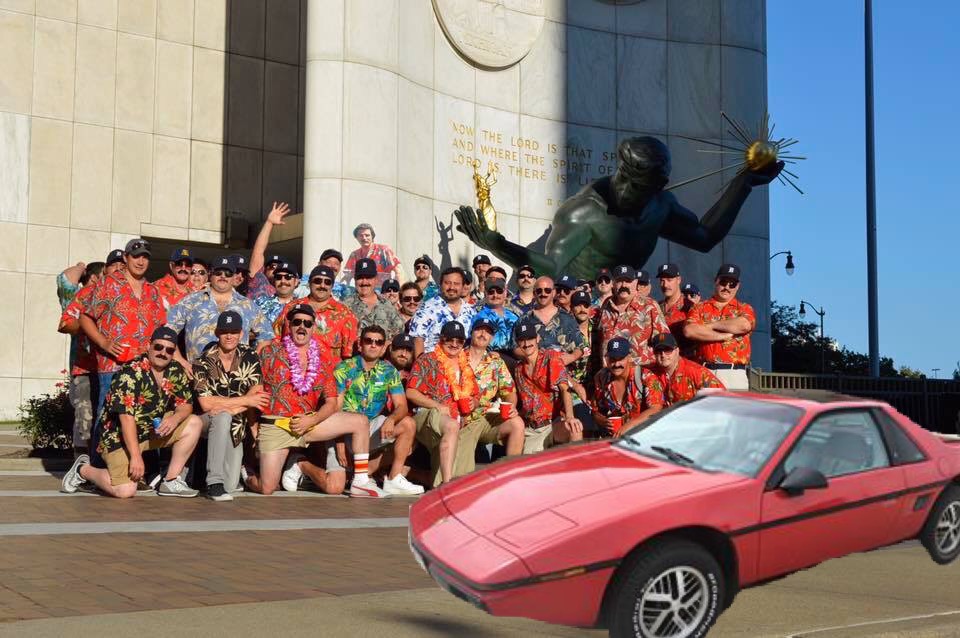 Chat Sports: So what's next for the Magnum P.I. guys? Are you only going to do this again if you get back in the Park?

Tuccini Bros: "I honestly don’t know how we can put this thing to bed. I think this is only going to get bigger and strong. This is the stuff legends are made of guys." – Chris