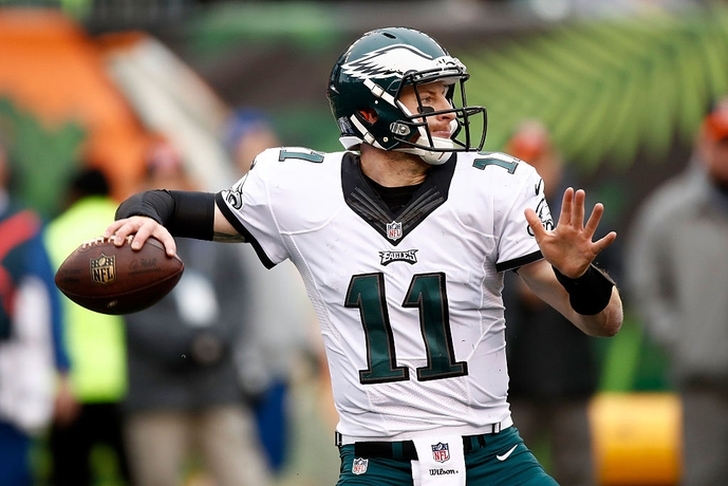 People keep talking about Carson Wentz going down like it's the not only the end of the season for the Philadelphia Eagles, but the end of an era... Headlines such as, "They have a plan, but do they have hope?" Let's not forget that Nick Foles is quite the capable field marshall. He tied the NFL single-game TD passes record when he dropped seven over the top of the Raiders in 2013. Sure, he has been on the bench for the last two seasons but it isn't like the Eagles will be sending in an old, washed-up backup QB at the end of his career. Foles is just 28 years old and in his 6th NFL season. In just 36 career starts, he has managed to throw 56 touchdown passes and rush for another five. The Eagles season is by no means 'lost'.

The remaining games for the Eagles are: at New York Giants, vs. Oakland Raiders, and vs. Dallas Cowboys. And let's be honest, a top high school QB could step into the system and beat the G-Men right now. This is backed up by the fact that the opening odds on this Sunday's game had the Eagles as 8-point favorites, even with the flux in the QB position. You have to check the top betting sites as the week progresses though, as some sites have the Eagles up to 9-point favorites and a few have the Giants getting a little love, moving from +8-point underdogs down to +7.5 points.

If the Giants had a sack of quarters and a victory was just dispensed detergent in a Philly laundromat, they still couldn't buy a win. They are rated number 28 by my favorite predictive power rankings and with a 2-11 record, the Giants actually have more reasons to lose than they do to win. Though they covered the point-spread in Week three the last time these two rivals faced off, that was a team that still had hope ... and a general manager ... and a Head Coach. With McAdoo getting McSh*t-canned and Jerry Reese along for that doo-doo ride, the Giants are not only depleted on-field but devastated in the leadership department as well.

Getting back to the on-field woes ... Apparently, the Giants roster is in such poor shape that they are digging into the practice squads of other teams. Picking up offensive lineman, Damien Mama from the Chiefs and WR, Hunter Sharp from the Broncos practice squad. And oooh the conspiracies regarding collusion to get Davis Web some playing time ... does it even matter now? All I know for sure is that no matter who starts at QB there will be miscues galore that the Eagles defense can and will take advantage of.

The Giants are only averaging 4.7 yards per play and I expect this to get worse as the season finishes out. This is coupled and tripled with the fact that the New York Giants are just 14.3% on the road and exactly, 16.7% as an away dog. Meanwhile, Philadelphia is 6-0 (100%) as a home favorite this season and has covered the spread 83.3% of the time at Lincoln Financial Field. Being favored, this does not bode well for Giants fans.

With Foles taking over the offense, there will probably be a few stumbling blocks, but he should start to find that old rhythm by halftime and then the Giants are in trouble. Look for a double-digit Eagles victory this Sunday, Dec. 17th, on their quest to a top-seeded playoff berth.