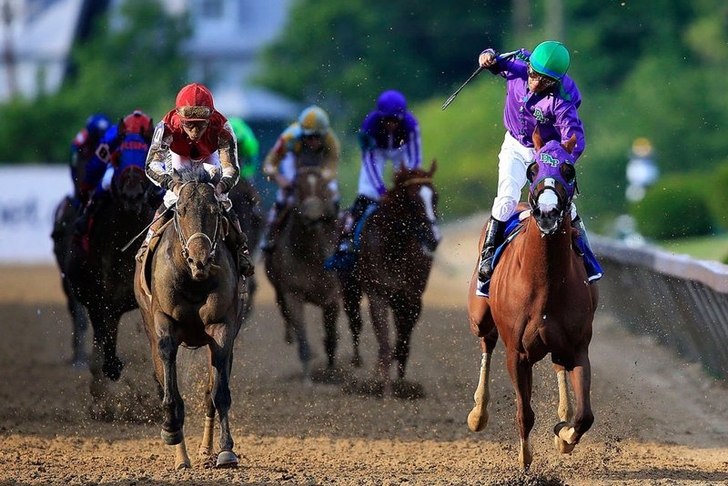 After California Chrome and jockey Victor Espinoza failed in their bid to capture the Triple Crown in Saturday's Belmont Stakes, Chrome co-owner Steve Coburn went on a rant to end all rants.

Coburn took his post-race interview opportunity to blast some of the race's other owners for failing to race their horses in either the Kentucky Derby or Preakness Stakes - including Belmont winner Tonalist:

"It's not fair to these horses that have been in the game since Day 1," Coburn told NBC, via Jay Hart of Yahoo! Sports. "... This is a coward's way out in my opinion ..."

"Our horse had a target on his back," Coburn continued, visibly upset. "Everybody else lays out one, or they won't run in the Kentucky Derby or the Preakness. They'll wait until the Belmont. You know what, if you've got a horse, run him in all three."

What did Twitter have to say about all this?

Well, Coburn has his supporters...

Steve Coburn would have been an amazing character in the Strawberry Shortcake universe.

He also has his critics...

Steve Coburn needs to learn that if you win with grace, you need to learn how to lose with grace. That display on NBC just now was pathetic

Actually glad California Chrome didn't win after seeing how much of a prick the owner Steve Coburn was in the post-race interview.

But, mostly people are just having fun at his expense.

Steve Coburn would have been an amazing character in the Strawberry Shortcake universe.

BREAKING: Steve Coburn found bound and gagged in a horse stall with a giant Breathe Right strip over his face. Wife Carolyn has no comment

Has anyone had the same thoughts as Steve Coburn? On another note does anyone think he could have played the Lion in the Wizard Of Oz?

Steve Coburn telling Kenny Rice about #CaliChrome's loss was madder than Wilford Brimley talking to someone who had Cream of Wheat! #Belmont

steve coburn: ``i'll never see another triple crown winner in my lifetime because of the way they do this.'' he's 61.

Have something to say about Steve Coburn's post-race comments? Send your tweets to @chatsports for a chance to be included!