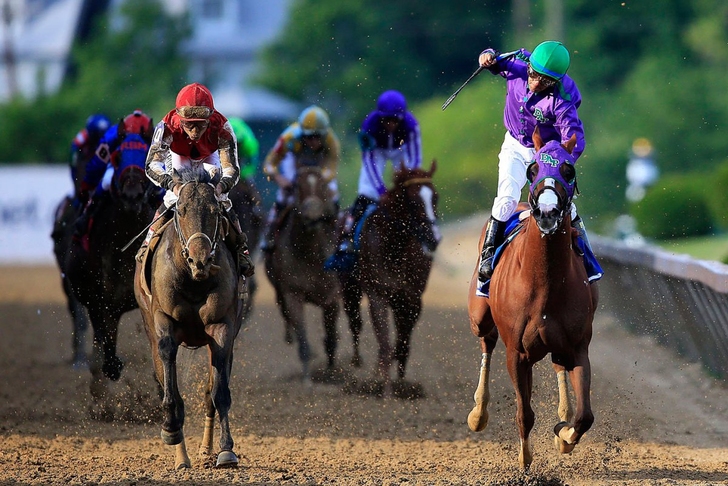 Recent history repeated itself on Saturday at Belmont Park in Elmont, New York, as three-year-old colt California Chrome finished 5th in the 2014 Belmont Stakes - falling short of becoming the first horse to capture the Triple Crown in 36 years.

Despite a valiant ride by jockey Victor Espinoza, the hopes of a nation of horse racing fans were dashed by Tonalist, who outlasted the field of eleven to thwart California Chrome's date with destiny with the Belmont victory.

Fatigue seemed to set in on California Chrome after the first turn as he fell into the unfamiliar position of running from behind halfway through the race. Some analysts believe that Espinoza rode too conservative of a race, hanging back and making a move way too late.

Either way, it all added up to another near miss for the Triple Crown.

"I thought he was gaining ground, but he didn't have it in him, apparently," owner Steve Coburn said immediately after the race. He followed that by issuing a complaint about the horses in the race, including Tonalist, who failed to run in either the Kentucky Derby or Preakness Stakes.

"It's all or nothing," said Coburn, visibly upset. "This is not fair to these horses and to the people that believe in them. This is the coward's way out."

Tonalist was ridden by jockey Joel Rosario, who ushered an amazing run to come from behind and take the race.

California Chrome becomes the thirteenth horse since Affirmed 1977's run to the Crown to complete the first two legs with wins in the Kentucky Derby and the Preakness Stakes, before falling short in the Belmont.

Only eleven horses have completed the vaunted Triple Crown in its illustrious history. At least until next year's festivities, that exclusive group will remain unchanged.

California Chrome is owned by Perry Martin and Steve Coburn, with the legendary Art Sherman handling the training duties. At 77-years-old, Sherman became the oldest trainer to ever win the Kentucky Derby. While that is an accomplishment to be celebrated in its own right, becoming the eldest trainer to ever win a Triple Crown would have been that much sweeter.

The loss may be even tougher on jockey Victor Espinoza. He was aboard Triple Crown-threat War Emblem back in 2002 when the horse stumbled coming out of the gate, finishing eighth in the Belmont after securing the first two races of the Crown.

In failing to capture Saturday's victory, California Chrome and his owners didn't just lose out on a spot in the record books. With a victory, owners Martin and Coburn would have netted $800,000 for the Belmont triumph and countless millions of dollars in sponsorship opportunities.

Keep checking back for more Chat Sports coverage of this landmark day in sports history.

For all the latest sports news and rumors, be sure to follow our Top News page.