The 10 Worst Scrooges in Sports 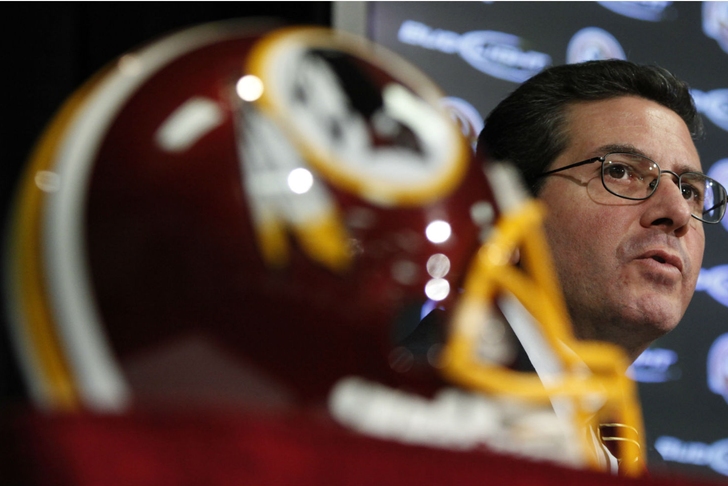 We all have that uncle. Let's call him Uncle Carl.

The smell of turkey is wafting through the house, making everyone dreamy with the tryptophan-addict shakes. LeBron is morphing from a forward to a guard to a center on the television set as everyone starts loosening their stomach muscles for resting plates full of glorious food while zoning through some Christmas basketball.

And then Uncle Carl walks in, farts, and then puts his hands down his pants to check for bird stripes. After a sniff, he proceeds to talk about the time that "hussie left him for that f$%^ing gas station attendant," cramming rolls into his gullet and picking bread crumbs out of the chest hair protruding from his wife beater.

Uncle Carl is a scrooge. A wet blanket on a festive season. Or more aptly,

However, Uncle Carl is small potatoes compared to the ten joy-sucking vacuums who make up this list. These are the ten sports owners who, if you happen to work for them, make every holiday feel like a perpetual Monday. These guys are...

THE TEN WORST SCROOGES IN ALL OF PROFESSIONAL SPORTS

The former CEO of WalMart took everything he learned from foisting cheap, useless gadgets, trinkets, and SpongeBob Squarepants footie pajamas on the American public, and used this same sense of "profit first, humans second" to drive a once respectable franchise into the nether regions of Major League Baseball. He is noted for revoking media credentials given to journalists who dare mention anything about the allegedly-but-not-actually-just-alleged unethical business practices used by the immortal WalMart monster.

Scroogiest moment: Duping the Kansas City public out of having the immortal George Brett in the owner's chair, while getting a 25% discount in the process. That extra money went...where? Where did it go? Roll back prices on hot dogs?

So, just to let you know...New York actually has three hockey teams.

Go check Wikipedia. I'll wait. I'm sure you thought the Islanders were contracted.

And who would blame you? Since Wang took over in 2000, the Islanders have zero, zilch, NO playoff series victories. After a respectable 2012-13 campaign which saw them get bounced in the first round of the playoffs for the fifth time in his tenure, the Islanders are once again bottom feeders in an extremely mediocre conference.

Scroogiest Moment: Wang has run through 8 coaches in 13 years, along with firing general manager Neil Smith forty days into his tenure in 2006, replacing him with back-up goaltender Garth Snow.

His ego is why we love(d) him. His ego is also why the Bobcats, despite the fire they've shown on defense this year, are a perpetual expansion team with him at the helm. Several noted sources decry Jordan's knowledge of the day-to-day business side of the game, predicting giant swarms of suckitude will continue to buzz around the franchise.

While the future may look a little brighter with MKG and Kemba Walker, the Bobcats are still an average-to-bad team in a bad-to-awful conference. While he's only been the majority owner of the Bobcats for two full seasons, Jordan's notoriously isolated avarice has lead to, at best, public apathy over the kitty-cats in Charlotte.

Scroogiest Moment: Drafting Kwame Brown with the Wizards. This is an automatic ticket onto this list. Oh yeah, and drafting Adam Morrison would get him here too.

Wolff is a relatively new entrant to the Order of Sports Scrooges, but he deserves it. Oh lord, does he deserve it.

Wolff is the bad boyfriend who treats you (the fans) well when no one else is around, but as soon as someone pretty like San Jose arches an eyebrow, he's out the door for a chance at a nickel or two.

While the product on the field is great (mostly due to the Stephen Hawking/Brad Pitt hydra monster that is Billy Beane), the handling of both the stadium issue in Oakland and the fans who still show up for the A's has been, to put it mildly, abysmal. The disdain Wolff has for anything which doesn't involve new money in a market other than Oakland is just disgraceful.

Scroogiest Moment: As seen in the video above, Wolff decided to blast the fans who actually pay their hard-earned money to watch his team for not showing up in greater numbers, despite both financial constraints for some families and the inability of the fans who do show up to clone themselves on command.

After the death of legendary Bengals owner Paul Brown in 1991, his son Mike took over the marquee franchise and proceeded to...

turn them into the Bungles!

Recent success notwithstanding, the Bengals have been downright awful under Brown's leadership. They've posted a winning record just five times in 23 years, failing to win a single playoff game in that span. A huge part of this is Brown's notorious reputation for penny-pinching when it comes to bringing free agent talent to the squad. Add in an underfunded scouting department and Akili Smith...and you have your number 6 entrant on the list.

Look at the picture.

Despite their 2010-11 Stanley Cup, Jacobs has been perhaps the most notorious cheapskate and money hoarder in all of the NHL for just under four decades.

Not only that, but Jacobs engaged in a pissing match in March over land he owns that is part of the Palm Beach (Florida) International Equestrian Center. A spokesperson for his family decried the usage of the grounds for a rap concert, stating that they didn't want to "attract the kind of people the Akon concert would attract to this community."

Scroogiest Moment: Being the single biggest reason (on the ownership side) that we're graced with the presence of an NHL lockout every so often. Thanks for that, Montgomery Burns.

Son of Cablevision founder Charles Dolan, James Dolan was born with a silver spoon lodged somewhere close to his mouth.

From blatantly disrespecting Knicks' great Patrick Ewing by offering him a coaching position...in the D-League...to countless intrusions on his employee's affairs, Dolan continues to amaze. His prudence led the best executive to grace the Knicks' staff in decades (Donnie Walsh) to resign on him after Dolan refused to shell out for a long-term deal.

Add in $100 million to Allan Houston, trading for Eddy Curry, and the continued cycle of relevance/irrelevance that is the New York Rangers...and you have James Dolan.

Scroogiest Moment: Using a professional basketball team tied to the hearts of millions...to promote this:

If you can only watch one of the videos I've posted here, make it the one above. Call it a favor from me. Just do it.

The only reason why Dan Snyder isn't number one on the list are the powers of blatant racism and thievery. And they only kept him this low by the smallest of margins.

From talking out of every end of his mouth in public to being a blatant nepotist who employs family members in lieu of actual football minds, Dan Snyder is the football equivalent of John Edwards from this episode of South Park.

Scroogiest Moment: There are absolutely too many to choose from, so I'm going to let this A-to-Z article on why Snyder blows monkey chunks do the work for me.

On the bright side? Two slash-and-burn World Series championships in 1997 and 2003.

Other than that...no owner in professional sports has pulled the rug out from under his team's fans with quite as much piss, vinegar, and sheer disregard for feelings as Loria.

Some teams rebuild. Loria takes success, grabs a butcher knife, and starts gutting the living poop out of it. 1998? From juggernaut to Mark Kotsay as team MVP in a heartbeat. 2004 and on? A ten-year playoff drought leading to, you guessed it, more fire sales and complete disregard for the dwindling fan base's best interests.

Scroogiest Moment: Essentially stealing $362 million in taxpayer money to build a glitter bomb of a ballpark, while holding...you guessed it...another fire sale! If you haven't caught on to a trend with Loria...profit > people.

One of the last of the old guard of xenophobic, penny-pinching, profit-driven idiots left rotting in his owner's chair, Sterling is number one with a freaking bullet on the list despite the absolute awesomeness of the new, improved, League Pass-mandatory Lob City.

Scroogiest Moment: There are so many. The very worst, in my humble opinion? Refusing to pay for out-of-network coverage for former head coach Kim Hughes to have life-saving prostate cancer surgery. The bright side? Corey Maggette, Chris Kaman, Marko Jaric, and Elton Brand footed the $70,000 bill for their former coach.

Bo Knows: Top 10 Bo Jackson Plays in the History of the Universe