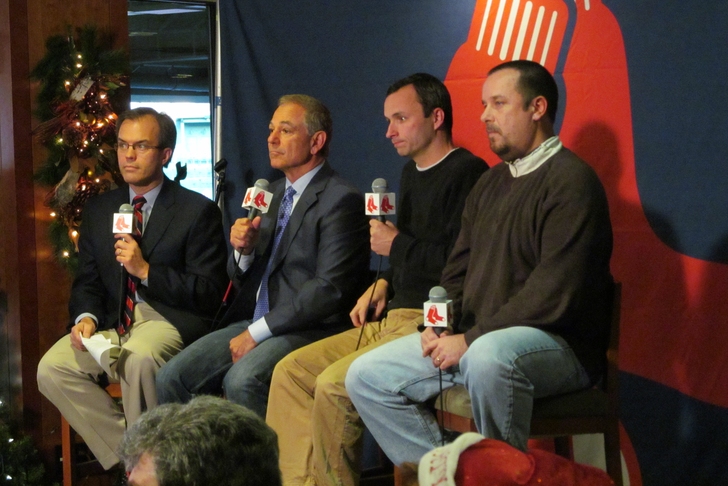 Minihane's ire was raised due to an interview Andrews conducted with St. Louis Cardinals starting pitcher Adam Wainwright during Tuesday's All-Star Game. The on-air chat came after the NL starter reportedly admitted to another reporter that he fed New York Yankees captain Derek Jeter a couple of "pipe shots" so he could get a hit.

“What I meant to say was I’m intentionally trying to throw a strike to get him out. It’s what I do most of the time, almost all the time,” Wainwright stated to Andrews. “’Piping one’ is the wrong window for that. It really is. If I’m going to get taken to the slaughterhouse for saying a stupid phrase, then I deserve it. What can you do?”

Rather than pursuing the issue any further, Andrews stepped back and allowed Wainwright a relatively easy retreat.

“Well, we appreciate you clearing that up,” Andrews stated. “Don’t you love social media?”

To which Wainwright replied, "no, I do not love social media."

This exchange incensed Minihane to no end, and per Zuri Berry of Boston.com, prompted an unabashedly sexist and pointed rant against Andrews:

"What a bitch. I hate her. What a gutless bitch. Seriously, go away. Drop dead. I mean seriously, what the hell is wrong with her? First of all, followup. Secondly, the guy admitted he did it. He told reporters he threw a couple of pipe bombs. So how is that social media’s fault?

“I hate her. I seriously hate her so much. Yeah, only if it wasn’t for social… social media is the reason she has a big house. Shut up. Shut up.”

Realizing that he had stepped over the boundaries of human decency, Minihane added, “I shouldn’t call her a bitch because I’m sure she’s a nice person.”

The show's co-host, Gerry Callahan, added his own sexist “bubblehead” and “bimbo” insults as well, furthering the disingenuous nature of Minihane's quick back-step.

In response to Kirk Minihane's inexcusable tirade, FOX Sports released this official condemnation (via SI's Richard Deitsch) of both Minihane and WEEI:

"Comments such as these are beyond inappropriate and inexcusable. It is unfortunate that one of the best sports talk radio stations in the country would allow and condone such low-class behavior from one of their on-air personalities."

WEEI management has not released an official statement on Minihane's rant as of this writing. Stay tuned.