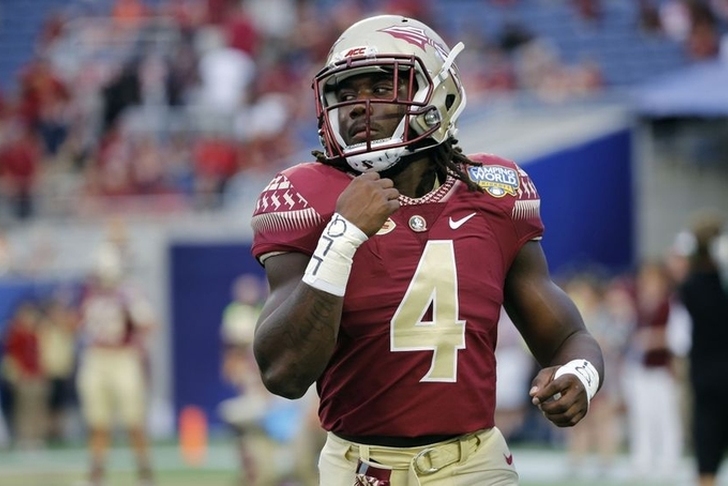 33. Browns: Dalvin Cook, RB, Florida State
That's right, Cook falls to round 2. I think the buzz about his off-the-field issues causing him to fall to Round 2 is legit. But even if that's the case, he won't last long. The Browns have shown interest in him and although it doesn't fill a massive need, it is great value.

34. TRADE: Bucs (via 49ers): Obi Melifonwu, S, UConn
I think there's a chance the Bucs take Melifonwu at No. 19 overall. If he falls to round two, they might be willing to part with their third round pick to get another starter at safety. The 49ers can move down and continue their rebuild. If Melifonwu does slide into the second round, he won't last long. We saw a bunch of trades in round two last year and could again this time.

36. TRADE: Seahawks: (via Bears): Kevin King, CB, Washington
The Seahawks trade down and still end up with a player they could take in Round 1. King's stock has risen, thanks to testing off the charts at the Combine. At 6-foot-3, he's a prototypical Seahawks corner and could start early.

RELATED: 5 Teams That Could Trade For Richard Sherman

37. Rams: Budda Baker, S, Washington
The Rams lost T.J. McDonald to the Dolphins and Maurice Alexander is moving to strong safety. That opens up a hole at free safety, which Baker can fill. He's a bit undersized, but could sneak into the first round. Adding Baker would allow LaMarcus Joyner to stay at the nickel corner spot, or even let Wade Phillips get creative with both players.

38. Chargers: Malik McDowell, DT, Michigan State
Dan Feeney is also an option, but McDowell fills a need too. Corey Liuget has struggled the last two years and McDowell could be his replacement.  A top 15 talent, attitude and effort issues will push McDowell down to the second round.

39. Jets: Chidobe Awuzie, CB, Colorado
The Jets need help at corner and there's some buzz Awuzie could in round one. I don't quite buy that, but he's risen in the pre-draft process. He'll play early right away.

40. Panthers: T.J. Watt, DE, Wisconsin
The Panthers need another young edge rusher and although Watt isn't a perfect scheme fit, he can play in a 4-3 scheme. There's been some first round buzz about Watt.

41. Bengals: Jarrad Davis, LB, Florida
If the Bengals don't go Foster in round one, they could go Davis in round two. He'd be a nice partner with Vontaze Burfict long-term. There's an outside chance he goes in round one.

42. Saints: Joe Mixon, RB, Oklahoma
The Saints have brought in Mixon for a visit and there's buzz they like him as a round two option. They do need another RB and the upside with Mixon is immense. I think New Orleans is willing to take a risk with him and although it costs them another defensive piece, this is the range I think Mixon will go.

43. Eagles: Cordrea Tankersley, CB, Clemson
The top three corners for the Eagles right now are Jalen Mills, Ron Brooks and Patrick Robinson, with only Robinson a free agent after next year. Ew. Adding two corners in the first three rounds is a real option for the Eagles. Here's another physical corner to play outside.

45. Cardinals: Adoree' Jackson, CB, USC
The Cardinals need a No. 2 corner and Jackson can be that player. He offers added return value, not that the Cardinals really need that. I think there could be a mini-run on corners in this range.

46. Vikings: Dan Feeney, OG, Indiana
The Vikings had terrible offensive line play this year and Feeney can help shore that up. The Vikings added two tackles, but I wouldn't be surprised if they added a guard early too.

47. Ravens: Pat Elflein, C, OSU
Jeremy Zuttah is gone and the Ravens need a replacement center. Elflein is the best one in this year's draft class. A defensive player also makes sense.

48. Colts: Tim Williams, OLB, Alabama
The Colts did address the edge rusher spot in free agency, but Jim Irsay wants more. Off-the-field issues will push Williams down, but he's one of the better pure pass rusher this year.

49. Redskins: Raekwon McMillan, LB, OSU
Yes, the Redskins did add Zach Brown. But Brown, Will Compton and Mason Foster are free agents after this year. Taking McMillan gives the Redskins a plan in the event one of the starters leave. This is solid value for him as well.

50. TRADE - 49ers (via Bucs): Cooper Kupp, WR, Eastern Washington
The 49ers trade down and get another weapon at WR. Kupp struggled at the Combine, but I still think he goes in the second round. I think he can be more than a slot wide receiver and would really help the 49ers' passing attack. The 49ers are going to be in asset acquisition mode this year.

51. Broncos: Jake Butt, TE, Michigan
The Broncos don't have a true pass catching threat at TE. Taking Butt, despite his injury, would provide Denver with one. Even if he misses part (or all) of the year, Denver can afford to wait.

52. Browns (via Tennessee Titans): Sidney Jones, CB, Washington
This is more good value for the Browns. A likely first round pick before tearing his Achilles tendon, Jones should still go in Round 2. The Browns are in a position where waiting for Jones to recover doesn't hurt them. Once healthy, he could be a No. 1 corner.

53. Lions: Caleb Brantley, DL, Florida
The Lions need another DL to pair with A'Shawn Robinson and ideally that's a disruptive player. That is what Brantley can be. He has first round talent, but has an inconsistent motor and will disappear at times.

54. Dolphins: Carl Lawson, DE, Auburn
The Dolphins could go LB, but there aren't any worth taking. Instead, they add a young defensive end that they badly need. Injuries and size issues are what keep Lawson in the back half of round 2.

55. Giants: D'Onta Foreman, RB, Texas
Remember the prime Brandon Jacobs years for the Giants? Drafting Foreman can bring that type of bruising, powerful running game back to New York. Foreman might only be a two-down back, but if that's the case, he'll make a perfect pairing with Paul Perkins.

56. Raiders: Marcus Williams, S, Utah
A linebacker would be great, but there isn't one worth taking here. So Oakland finds a long-term Reggie Nelson replacement. Williams can be a quality free safety in the NFL. I almost put an RB here, but figure the Raiders will end up with Marshawn Lynch.

57. Texans: Davis Webb, QB, Cal
I think the Texans pass on a QB in round one, but Webb makes sense if he's here in round two. I don't buy the Webb in the first round hype at all. Which makes it fitting the Texans get him, since they also ended up with Tom Savage, who had the same crazy hype.

58. Seahawks: Antonio Garcia, OT, Troy
Seattle really needs another lineman, preferable a tackle. Garcia is the top one left and could go earlier.

59. Kansas City Chiefs: Alvin Kamara, RB, Tennessee
The Chiefs could go with a corner like Teez Tabor here, but Kamara is good value and fills a need. He has some Jamaal Charles in him and the Chiefs need another RB. He could go before this.

60. Cowboys: Jordan Willis, DE, Kansas State
The Cowboys took care of corner, but still need help on the defensive line and at safety. We'll give them an edge rusher here, one who happens to be a steal. Willis again helped his stock at the NFL combine and he looks like a second round pick now. He should be able to contribute early for the Cowboys.

61. Packers: Ryan Anderson, OLB, Alabama
Anderson could easily go before this, but a deep edge rusher class means someone has to slide a bit. The Packers find themselves needing another pass rusher, with Julius Peppers and Datone Jones gone and Clay Matthews aging. Anderson sould be able to help out early as a rotation player.

62. Steelers: Josh Jones, S, N.C. State
Jones, in many ways, is a lesser version of Obi Melifonwu. He and Sean Davis would form a great duo in the back-end long term, and Jones could contribute right away as a third safety.

63. Falcons: Dorian Johnson, OG, Pitt
The Falcons only major need on offense is at guard. Johnson should be able to step in right away. In a bad OL class, he could go earlier than this.

64. Panthers (via Patriots): Desmond King, DB, Iowa
Another DB like Teez Tabor (who I really wanted to find a round 2 spot for, but couldn't) fits, but the Panthers could use King in several different ways. They could make him into a safety or a zone corner. Either way, he'd contribute.