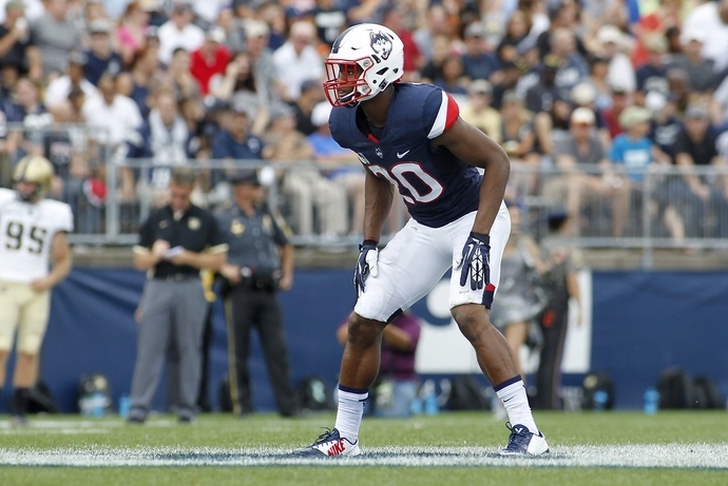 33. Browns: Obi Melifonwu, S, UConn
If Melifonwu falls to Round 2, he won't last long. He's a great fit for the Browns, who badly need safety help. This would be strong value and give the Browns likely day one starter.

34. 49ers: Dalvin Cook, RB, Florida State
That's right, Cook falls to round 2. I think the buzz about his off-the-field issues causing him to fall to Round 2 is legit. The 49ers have shown interest in him and although it doesn't fill a massive need, it is great value. But, don't be surprised if Joe Mixon ends up being taken before him. The off-the-field stuff (plus injuries), has NFL teams worried.

36. TRADE: Seahawks: (via Bears): Kevin King, CB, Washington
The Seahawks trade down and still end up with a player they could take in Round 1. King's stock has risen, thanks to testing off the charts at the Combine. At 6-foot-3, he's a prototypical Seahawks corner and could start early.

37. Rams: Carl Lawson, EDGE, Auburn
The Rams added Connor Barwin to help fill their 3-4 OLB need, but more help is needed. There's Robert Quinn, Eugene Sims and William Hayes are gone and Ethan Westbrooks had a domestic violence arrest, although he was re-signed. Lawson provides the Rams with a long-term option if he can stay healthy.

38. Chargers: Malik McDowell, DT, Michigan State
Dan Feeney is also an option, but McDowell fills a need too. Corey Liuget has struggled the last two years and McDowell could be his replacement.  A top 15 talent, attitude and effort issues will push McDowell down to the second round.

39. Jets: Budda Baker, S, Washington
The Jets need help at safety and there's some buzz Baker could go in round one. Baker is a free safety and should start right away. He also fits the Jets BPA plan.

RELATED: 4 QBs The Jets Could Target In The NFL Draft

40. Panthers: T.J. Watt, DE, Wisconsin
The Panthers need another young edge rusher and although Watt isn't a perfect scheme fit, he can play in a 4-3 scheme. There's been some first round buzz about Watt, but I don't quite buy that.

41. Bengals: Joe Mixon, RB, Oklahoma
The Bengals have serious interest in Mixon and it makes sense. They've never feared off-the-field issues and Mixon is perhaps the second-best back in this year's class. Mixon would provide an upgrade over Jeremy Hill, who could still serve as a goal line back while under contract. Gio Bernard could still be a change-of-pace back.

42. Saints: Chidobe Awuzie, CB, Colorado
There's been first round buzz around Awuzie, but a few of the corners will likely fall. Awuzie can do a bit of everything: play outside, inside and even at safety in a pinch. The Saints need corner help and Awuzie can provide that early.

43. Eagles: Cordrea Tankersley, CB, Clemson
The top three corners for the Eagles right now are Jalen Mills, Ron Brooks and Patrick Robinson, with only Robinson a free agent after next year. Ew. Adding two corners in the first three rounds is a real option for the Eagles. Here's another physical corner to play outside.

44. Bills: Jarrad Davis, LB, Florida
The Bills need corners, but with Zach Brown now in Washington, Davis fills a need too. He could sneak into the first round, so it's quality value.

45. Cardinals: Tre'Davious White, CB, LSU
The Cardinals need a No. 2 corner and White can be that player. He offers added return value, not that the Cardinals really need that. I think there could be a mini-run on corners in this range. White could sneak into round one.

46. Vikings: Dan Feeney, OG, Indiana
The Vikings had terrible offensive line play this year and Feeney can help shore that up. The Vikings added two tackles, but I wouldn't be surprised if they added a guard early too.

47. Ravens: Pat Elflein, C, OSU
Jeremy Zuttah is gone and the Ravens need a replacement center. Elflein is the best one in this year's draft class. A defensive player also makes sense.

48. Colts: Adoree' Jackson, CB, USC
The Colts need some corner help, something Jim Irsay has said. Off-the-field issues will push Williams down, but he's one of the better pure pass rusher this year.

49. Redskins: Alvin Kamara, RB, Tennessee
The Redskins could go defense here, but Kamara is solid value and fills a need. He has some Jamaal Charles in him and the Redskins need another RB. He could go before this if a team loves him.

50. Bucs: Marcus Williams, S, Utah
The Bucs could go safety in round 1, but they get one here. Williams is a free safety, making him a better partner for J.J. Wilcox. Williams is absurdly young, at just 20 years old. He has plenty of upside.

51. Broncos: Jake Butt, TE, Michigan
The Broncos don't have a true pass catching threat at TE. Taking Butt, despite his injury, would provide Denver with one. Even if he misses part (or all) of the year, Denver can afford to wait. I think he ends up in round two, although maybe not this high.

52. TRADE: Titans (from Browns via Titans): Sidney Jones, CB, Washington
Well that's funny how this worked out, huh? The Titans end up getting their second round pick back and they use it on a corner who would have gone in round one if healthy. Jones has plenty of talent, but how he recovers from his Achilles tendon, will be key. Jones should still go in Round 2 and once healthy, he could be a No. 1 corner. He claims he'll be cleared in six months, which means he could go before this.

53. Lions: Caleb Brantley, DL, Florida
The Lions need another DL to pair with A'Shawn Robinson and ideally that's a disruptive player. That is what Brantley can be. He has first round talent, but has an inconsistent motor and will disappear at times.

54. Dolphins: Raekwon McMillan, LB, OSU
The Dolphins could go LB in round one if Lamp is gone. But if they can land Lamp, they'll be happy to snag McMillan in round two. Worries about coverage could cause him to fall out of Round 1, but he won't last until the third.

55. Giants: D'Onta Foreman, RB, Texas
Remember the prime Brandon Jacobs years for the Giants? Drafting Foreman can bring that type of bruising, powerful running game back to New York. Foreman might only be a two-down back, but if that's the case, he'll make a perfect pairing with Paul Perkins.

56. Raiders: Montravius Adams, DT, Auburn
A linebacker would be great, but there isn't one worth taking here. That puts the Raiders in a rough spot, where the needs don't match the players on the board. Instead, they take perhaps the best player (non corner) on the board in Adams. The Raiders need another DT with Stacy McGee gone and although a player on the roster could step up, Adams gives them another option. The upside is there, but the effort isn't always.

57. Texans: Davis Webb, QB, Cal
I think the Texans pass on a QB in round one, but Webb makes sense if he's here in round two. I don't buy the Webb in the first round hype at all. Which makes it fitting the Texans get him, since they also ended up with Tom Savage, who had the same crazy hype.

58. Seahawks: Antonio Garcia, OT, Troy
Seattle really needs another lineman, preferable a tackle. Garcia is the top one left and could go earlier.

59. Kansas City Chiefs: Teez Tabor, CB, Florida
If it wasn't for a terrible 40 time, Tabor could be a first round pick. But after posting some of the worst numbers among corners, Tabor will slide. But, he has a great ball skills and did claim he had a hamstring injury. He could end up being a steal and provides the Chiefs with a needed No. 2 corner.

60. Cowboys: Jordan Willis, DE, Kansas State
The Cowboys took care of corner, but still need help on the defensive line and at safety. We'll give them an edge rusher here, one who happens to be a steal. Willis again helped his stock at the NFL combine and he looks like a second round pick now. He should be able to contribute early for the Cowboys.

61. Packers: Tim Williams, OLB, Alabama
Williams could easily go before this, but a deep edge rusher class means someone has to slide a bit. Plus, his off-the-field worries will be a concern. The Packers find themselves needing another pass rusher, with Julius Peppers and Datone Jones gone and Clay Matthews aging. Williams should be able to help out early as a third down rusher.

62. Steelers: Josh Jones, S, N.C. State
Jones, in many ways, is a lesser version of Obi Melifonwu. He and Sean Davis would form a great duo in the back-end long term, and Jones could contribute right away as a third safety.

63. Falcons: Dorian Johnson, OG, Pitt
The Falcons only major need on offense is at guard. Johnson should be able to step in right away. In a bad OL class, he could go earlier than this.

64. Panthers (via Patriots): Desmond King, DB, Iowa
Another DB like Fabian Moreau (who I really wanted to find a round 2 spot for, but couldn't) fits, but the Panthers could use King in several different ways. They could make him into a safety or a zone corner. Either way, he'd contribute.

To cut down on load times, Round 3 of my mock draft is located here!