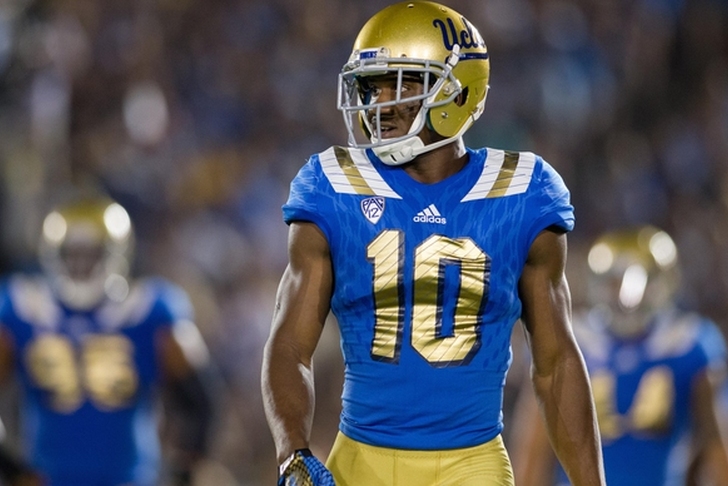 65. Browns: Fabian Moreau, CB, UCLA
Moreau could go in round two and fills a big need for the Browns. He should be at least a quality No. 2 corner for the Browns.

66. 49ers: Ryan Anderson, EDGE, Alabama
The 49ers need more passing rush help. Anderson won't be a perfect LEO, but he can fit the role or at least split time with Aaron Lynch.

68. Jaguars: Dion Dawkins, OL, Temple
It's not great value, but Dawkins fills a need. He can start off at guard and maybe play tackle when Braden Albert leaves.

69. Rams: Bucky Hodges, TE, Virginia Tech
The Rams need more weapons for Jared Goff and Hodges could be a great one. I love him and he'd be an upgrade over Lance Kendricks. Tyle Higbee is on the roster, but Hodges has more upside.

70. Jets: Zay Jones, WR, ECU
Jones is a potential round two pick. With Brandon Marshall gone, the Jets could use another WR.

71. Chargers: Curtis Samuel, WR, Ohio State
Travis Benjamin wasn't great and the Chargers could use another WR. I think a round 3 run on WRs is likely, but Samuel and several others could go in Round 2. He's a Percy Harvin type, who could play some third down back for the Chargers.

72. Patriots (from Panthers): Tyus Bowser, EDGE, Houston
Here's a much-needed edge rusher for the Patriots. Bowser strikes me as a Patriots player.

73. Bengals: Tarell Basham, DE, Ohio
The Bengals could add an edge rusher in the first two rounds. If they wait, Basham brings round two value.

UP NEXT: Latest NFL Draft Rumors And News

75. Bills: Rasul Douglas, CB, West Virginia
The Bills really need corner help. Douglas is the top one left on the board.

77. Cardinals: JuJu Smith-Schuster, WR, USC
The Cardinals won't have Larry Fitzgerald forever. Here's a big-bodied possession receiver to take his place. Smith-Schuster's lack of speed could cause him to fall.

78. Ravens: Anthony Walker, LB, Northwestern
It's a bit early for Walker, but the top ILBs are gone and the Ravens need another with Zach Orr's retirement.

79. Vikings: Chris Wormley, DT, Michigan
Sharrif Floyd's future is up in the air because of a knee issue. Wormley, who could go in round two, can replace him.

81. Redskins: Ethan Pocic, OL, LSU
Pocic can play center, but the Redskins might use him at guard instead. He could easily go before this.

82. Broncos: Chris Godwin, WR, Penn State
This is great value for Denver, as Godwin could sneak into the late second. He won't be a No. 1 option, but he could become a No. 2. For the time being, he'll be an upgrade as the Broncos' No. 3 option.

83. Titans: Justin Evans, S, Texas A&M
I'm high on Evans and think the Titans can find a way to pair him with Johnathan Cyprien. Maybe one lines up some at LB, but Evans has great upside. It is a loaded safety class, after all.

84. Bucs: Kareem Hunt, RB, Toledo
This is near the top of Hunt's range, but he's a good runner. With Doug Martin a major question mark, the Bucs will look for another RB.

85. Lions: DeMarcus Walker, DE, Florida State
With a loaded edge rusher class, it's Walker who ends up sliding. It's good value for the Lions, who need more help. Walker could shift inside on passing downs.

86. Vikings (from Dolphins): Jordan Leggett, TE, Clemson
The Vikings like using two tight ends and Leggett can be that. With Rhett Ellison gone and the Vikings having two 3rds in an amazing TE class, don't be surprised if they pull the trigger.

87. Giants: Carlos Watkins, DT, Clemson
Is Johnanthan Hankins coming back? And if so, will it be a long-term deal? If not, here's a replacement.

88. Raiders: Eddie Jackson, S, Alabama
There's still no linebacker worth taking, which hurts the Raiders. But, Jackson could pair with Karl Joseph to form a dynamic safety duo.

90. Seahawks: Derek Rivers, EDGE, Youngstown State
If the Seahawks are looking for extra edge rusher depth, Rivers makes sense. The Seahawks don't have a ton of needs, so they could target the best player or trade down.

91. Chiefs: Chad Hansen, WR, Cal
Will Chris Conley take a step forward? Here's some insurance if not. Hansen could be a quality No. 2 WR in the NFL. This year's WR class is full of them.

92. Cowboys: Marcus Maye, S, Florida
The Cowboys get lucky and they snag the top safety left. Maye could start early for the Cowboys.

93. Packers: Marlon Mack, RB, South Florida
Ty Montgomery might not be a true feature back, but Mack can help shoulder the load. He's a talented runner and fits what the Packers look for at RB.

94. Steelers: Amara Darboh, WR, Michigan
The Steelers are looking for a WR early, and this is the right range for Darboh.

RELATED: 3 Other WRs The Steelers Could Draft

95. Falcons: Tanoh Kpassagnon, DL, Villanova
Here's some more defensive help for the Falcons. A great size-speed combo, Kpassagnon could be a key part of the Falcons defensive line long-term, but he reminds me of Margus Hunt.

96. Patriots: Corn Elder, CB, Miami (FL)
Here's a future nickel corner for the Pats. If Malcolm Butler is moved, corner is near the top of the needs list.

99. Eagles* (via Ravens): Joe Mathis, EDGE, Washington
With Connor Barwin gone, the Eagles need more young depth. Adding a WR or another CB could be an option here too.

101. Broncos*: Dalvin Tomlinson, DL, Alabama
Tomlinson is a younger, and potentially better, player than Domata Peko. He could help upgrade the Broncos run defense in a few years.

103. Saints* (from Pats via Browns): Duke Riley, LB, LSU
Riley is a potential starting LB for the Saints in a year or two.

105. Steelers*: Adam Shaheen, TE, Ashland
Big Ben loves big targets and they don't get much bigger than Shaheen. LaDarius Green has yet to make an impact. Although Shaheen is raw, he has great upside.

106. Seahawks*: Howard Wilson, CB, Houston
Why not double-dip? If Richard Sherman is traded (or leaves in a few years), the Seahawks will need more corners. This also fits the BPA approach.