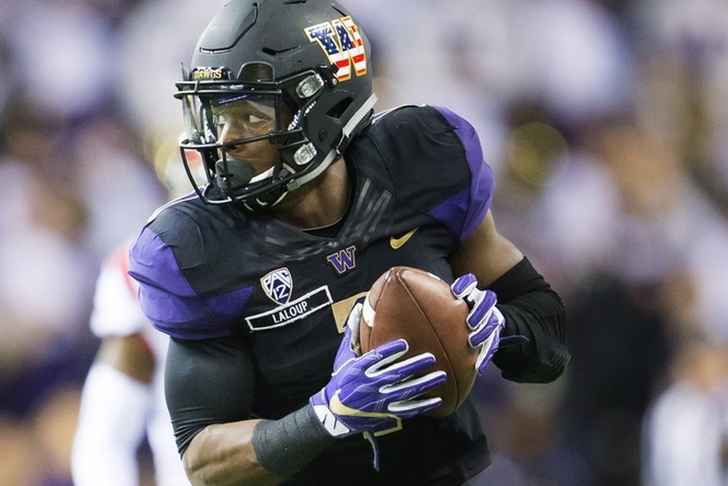 17. Washington Redskins: Jonathan Allen, DT, Alabama
Someone is going to fall from Top 10 talent to just inside the Top 20 this year and I'm leaning towards Allen. He's a top 5 player for me, but NFL teams are worried about his shoulder. The Redskins invested heavily on the defensive line this offseason, but this is too good of value. Washington is a hard team for me to mock for this year, but Allen would be a great pick.

18. Tennessee Titans: John Ross, WR, Washington
After that absurd 4.22 40-yard dash, I'll be surprised if Ross doesn't go in the first. There are still concerns about his injury history and his route-running, but he gives the Titans the deep threat they don't truly have. He's a young DeSean Jackson.

19. Tampa Bay Buccaneers: David Njoku, TE, Miami (FL)
With Howard gone, the Bucs are in a tricky place. They could go safety, but after adding J.J. Wilcox, I'm not sure they'll take a Jabrill Peppers or Obi Melifonwu in round 1 (it's a real option though). Instead, they get another weapon for Jameis Winston. Njoku has massive upside, and he'll be deadly running seam routes. I think he ends up going in round one, despite a loaded tight end class. As for Dalvin Cook, I think his off-the-field worries push him down to the second round.

20. Denver Broncos: Garett Bolles, OT, Utah
OT is a need and Bolles is viewed by some (not me though) as the top one. I think Denver is in that grouping. He's older and a bit more raw than ideal, but he could start at left tackle right away for Denver.

21. Detroit Lions: Haason Reddick, LB, Temple
They went heavy offensive line last year and I expect the Lions to target the front seven this year. Reddick could go in the Top 15, making this a decent value pick. If Reddick is gone, the Lions could target a defensive lineman.

22. Miami Dolphins: Forrest Lamp, OG, Western Kentucky
The Dolphins focus on the front seven in free agency, freeing them up to target a OG like Lamp. He'll go in the first round and fills a big need for Miami. He was a tackle in college, but will transition inside for the NFL. Lamp might not last this long, which would force the Dolphins to look elsewhere, likely at DE or LB. A player like Obi Melifonwu could be an option here too.

24. Oakland Raiders: Gareon Conley, CB, Ohio State
The Raiders really need a linebacker, but Conley just has too much value. He can line up anywhere at corner, giving the Raiders the No. 3 option they so badly need. If Conley is off the board (he could be, unless the EDGEs/CBs slide), a LB makes a lot of sense.

25. Houston Texans: Ryan Ramczyk, OT, Wisconsin
I think the Texans will pass on a QB this year, even with Watson and Kizer on the board. They'll either stick with Tom Savage or add someone like Jay Cutler. This is good value for Ramczyk and fills a major need. With Derek Newton coming off a nasty leg injury that resulted in two torn patellar tendons, the Texans could use a new RT for next year. Ramczyk could even slide to LT when Duane Brown retires.

RELATED: 5 Teams That Could Trade For Richard Sherman

26. TRADE: Chicago Bears (via Seattle Seahawks): DeShone Kizer, QB, Notre Dame
Here's one of the trades I promised you. I think the Bears are very high on Kizer, although they won't take him at No. 3. Instead, we see a similar deal to the Paxton Lynch one, with the Seahawks moving down to the top of round two in exchange for a swap of 3rd round picks (No. 67 for No. 102). The Bears get an extra year by making Kizer a first round pick and I think this about the range Kizer goes. I suspect someone will move up for him.

27. Kansas City Chiefs: Zach Cunningham, LB, Vanderbilt
How long does Derrick Johnson have left? He's coming off another Achilles injury and Ramik Wilson only fills one starting spot. This is solid value for Cunningham, who I think goes in the first round. A corner or QB also makes sense.

28. Dallas Cowboys: Quincy Wilson, CB, Florida
Secondary or edge rusher, where do the Cowboys go? With the way the board fell, the Cowboys have options at all their major needs. Taking Wilson gives the Cowboys a future No. 1 corner, something the team lacks right now. The main worry is that he's not the great athlete the Cowboys tend to prefer. Obi Melifonwu or an edge rusher also makes sense here.

29. Green Bay Packers: Jabrill Peppers, S, Michigan
The Packers could go a few different directions, but secondary is the main need. They're set at safety for next year, but Morgan Burnett's contract is up after next year. He might get more money elsewhere and this pick would allow the Packers to let him leave. Peppers can contribute at various spots on the field next year for Green Bay, including linebacker. I think Peppers goes in the first and this should be the right range.

30. Pittsburgh Steelers: Charles Harris, EDGE, Missouri
Harris is a gifted pass rusher, but might be limited to 3rd downs only early in his career. He can fill a part-time role for the Steelers, thanks to the presence of Bud Dupree and James Harrison. A big safety, like Obi Melifonwu, could be an option.

31. Atlanta Falcons: Takkarist McKinley, EDGE, UCLA
The Falcons don't have a ton of needs, but this is a nice combination of value and need. McKinley could slide a bit because of shoulder surgery, but he has the making of a really good edge rusher. He'd be a nice partner for Vic Beasley.

32. New Orleans Saints (via New England Patriots): Deshaun Watson, QB, Clemson
Yeah, that's right. The Saints are searching for a franchise heir to Drew Brees and Watson would be a perfect mentee. His arm strength is poor, but Brees has dominated the NFL with a less-than-ideal arm. Watson can sit for a year or two and learn before taking over. I think Watson ends up in New Orleans and it might even be at No. 11 overall. If it's not a QB, corner makes sense.

To help cut down on the load times, Round Two of the Mock Draft is here!