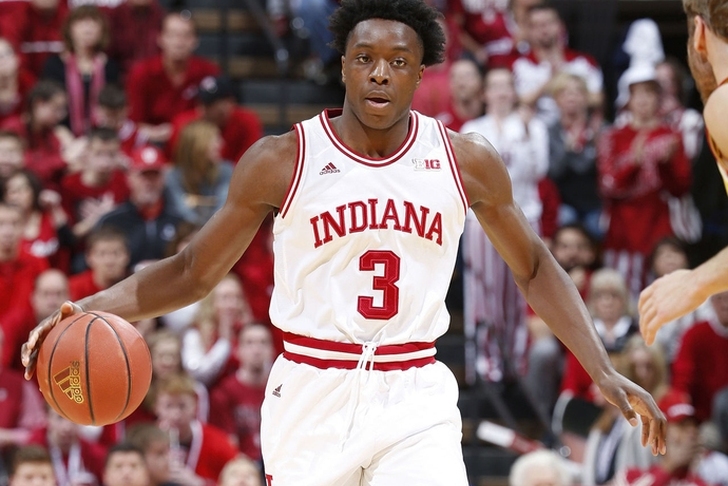 Here are the first round non-lottery picks in my 2017 mock NBA Draft. Lottery picks are located here.

Minnesota wanted to trade down, wanted wing help and need to improve defensively - getting Anunoby would be the answer to all three of those prayers.

He is athletic, versatile and strong - and is just starting to scratch the surface of his potential. Anunoby is already a dynamite defender who can lockdown opponents on the perimeter or in the post, and while he's still a work in progress offensively, he has the potential to be a very good small ball four. His stock dropped after season-ending ACL injury, but assuming he is able to fully recover, Minnesota would get an elite wing defender they really need in the Western Conference.

Ferguson opted to play in Australia instead of going to Arizona, and carved out a niche role as a three-point shooter. Milwaukee is placing a huge emphasis on shooting this year, making this a perfect fit.

Collins is a true post threat at the power forward position. Even though that type of player is being phased out of today's NBA, Indiana can take him because of Myles Turner's versatility at center. Collins will be able to contribute immediately off the bench and would give the Pacers another scoring option.

Atlanta is trying to move on from Dwight Howard, so why not draft his replacement? Anigbogu is a pure upside pick, but with Howard still under contract for a few years, the Hawks can be patient with the 18-year-old. He's a very good, very fluid athlete and an excellent rebounder, though teams see the most potential for him as an elite shot-blocker and post defender at the NBA level.

The Wolves take Kennard with the second first-rounder they get back in that trade with Portland. They would like to improve their wing depth, and Kennard would plenty of scoring off the bench. He's incredibly polished on that end of the floor, and despite his defensive limitations, Minnesota shouldn't overthink this.

He needs to fill out, like most 19-year-olds, but Kurucs has good ball-handling ability and is a knockdown shooter that can create shots for himself. Oklahoma City needs shooting and bench scoring. They'd love Kennard, but Kurucs is a good backup plan.

Brooklyn needs to gamble on high-upside projects, so they'll take a shot on Jeanne if he's available. Jeanne needs to add strength more than anyone else in this draft and may be a draft-and-stash prospect because of it, but his potential is immense. Picture him as a Rudy Gobert who can handle the ball and has a three-point jumper. He's still learning the game, particularly defensively, but the potential is obvious.

Patton skyrocketed up draft boards with his outstanding play during his freshman season, showcasing incredible fluidity, athleticism and skill as a seven-footer. He changes the game on both sides of the ball, with is something Toronto really needs from a big man. His athleticism also makes him the perfect change-of-pace next to Jonas Valanciunas.

Leaf has surprising cemented himself as a first-round talent at UCLA this season. He will never develop into a go-to guy, but Leaf is a very smart complementary player who will be able to make an immediate impact as a stretch four.

Another high upside pick for the Nets, Wilson flashed a ton of potential during his breakout junior season. His length, athleticism and foot speed give him unlimited defensive potential, and his three-point shooting and ball-handling abilities make him a nightmare as a stretch four. Wilson needs to become more consistent and play stronger, but he's a walking mismatch.

Ojeleye's skill set translates perfectly to the NBA. His strength and athleticism makes him a perfect stretch four, and he's excellent at scoring around the basket. However, he's also quick enough to defend small forwards on the perimeter. His potential is high enough that the Lakers should take a flyer on him.

Simply put, Adebayo is an athletic beast. He's an extremely strong player who loves getting physical on the block on both ends of the court. Adebayo is still incredibly raw offensively, and his athleticism is his main calling card right now. San Antonio knows how to develop talented players - look for them gamble on Adebayo to hope they can develop him.

George Hill may leave the team in free agency (especially if Gordon Hayward leaves), Shelvin Mack is also a free agency and Utah isn't convinced Dante Exum is a true point guard. Because of that, there's a good chance they take Evans, who provides tremendous value at the end of the first round. He's small, but is a great playmaker and excellent in the pick and roll. He has the potential to develop into a starter rather quickly.

To help cut down on the load times, the 2nd Round of the Mock Draft can be found here!