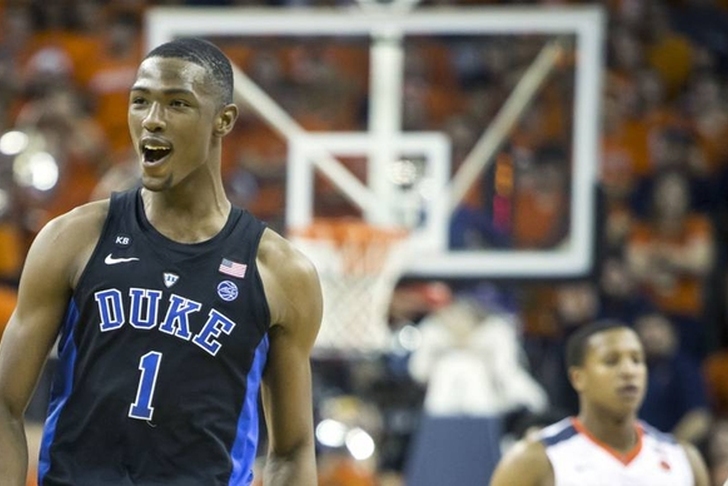 Here are the first round non-lottery picks in my 2017 mock NBA Draft. Lottery picks are located here.

Big men with injury histories don't seem to do well in Portland, but Portland really likes Giles as a prospect after they checked him out medically - and he could potentially creep even higher than this. He was very limited at Duke after tearing both ACLs in high school that resulted in three knee surgeries (and a 14-month layoff before his Duke debut), and he was playing at much less than 100 percent all season for the Blue Devils. But, before the injuries, he was the top overall player in this freshman class and looked like a potential franchise player. The Blazers are hoping he can get back to that form and develop a Big 3 with Damian Lillard and C.J. McCollum.

Jackson showcased his full potential this year at UNC as a lanky shooter/defender, making him a prime "3-and-D" guy in the NBA. As an experienced college player, he should be able to make an immediate impact off the bench at the NBA level. Milwaukee is placing a huge emphasis on shooting this year, making this a perfect fit.

This is great value for Anunoby, especially in the soon-to-be post-Paul George era of Pacers basketball. He is already a dynamite defender who can lockdown opponents on the perimeter or in the post, and while he's still a work in progress offensively, he is just scratching the surface of how good he can be.

Atlanta got rid of Dwight Howard, so why not draft his replacement? Anigbogu is a pure upside pick, but with the Howard trade, it looks like the Hawks are starting a rebuild. He's a very good, very fluid athlete and an excellent rebounder, but teams see the most potential for him as an elite shot-blocker and post defender at the NBA level.

This pick serves two purposes for the Blazers. First off, it gives them some sort of insurance if Giles continues to have knee problems. Secondly, Adebayo would give them a big man with the foot speed to defend both in paint and on the perimeter. That athleticism also gives him a good deal of upside, especially as a lob threat off the pick-and-roll.

Ferguson opted to play in Australia instead of going to Arizona, and carved out a niche role as a three-point shooter. OKC was the worst three-point shooting team in the league last season, making this a good fit. They would have loved Rodions Kurucs before he removed his name from the draft, but Ferguson is a good plan for OKC.

Pasecniks could very easily go earlier that this, and he could very easily go later, but Brooklyn needs to gamble with their picks. Enter the talented 7-foot-2 Pasecniks. He's an extremely fluid athlete for his size, giving him good defensive upside, and already has excellent touch around the rim. Pasecniks is still developing, but is offensive game is already drawing some comparisons to fellow Latvian Kristaps Porzingis. If he can develop into 75 percent of the player Porzingis is/will be, it's a risk worth taking for the Nets.

Patton skyrocketed up draft boards with his outstanding play during his freshman season, showcasing incredible fluidity, athleticism and skill as a seven-footer. He changes the game on both sides of the ball, with is something Toronto really needs from a big man. His athleticism also makes him the perfect change-of-pace next to Jonas Valanciunas.

Leaf could very easily go earlier than this (Miami has some interest in him at No. 14), but Utah makes sense for him - especially considering how much they value spacing the floor and perimeter shooting. While he will never develop into a go-to guy, Leaf is a very smart complementary player who will be able to make an immediate impact as a stretch four.

Ojeleye's skill set translates perfectly to the NBA. His strength and athleticism makes him a perfect stretch four (he's also excellent at scoring around the basket), and his perimeter game also makes him a viable small forward. Ojeleye is also quick enough to adequately defend players on the perimeter. His potential is high enough that, after taking two big men with their earlier picks, Portland will take a flyer on him.

So this pick was originally for the Nets, and even though the Lakers acquired it in the D'Angelo Russell deal, the pick doesn't change. Wilson flashed a ton of potential during his breakout junior season. His length, athleticism and foot speed give him unlimited defensive potential, and his three-point shooting and ball-handling abilities make him a nightmare as a stretch four. Wilson needs to become more consistent and play stronger, but he's a walking mismatch.

Kuzma continues to rise up draft boards as he works out for teams due to his intriguing combination of size, length, athleticism and three-point shooting ability. The Utes didn't really use him as a perimeter threat during his collegiate career, and he's still inconsistent as a shooter, but he has shown an immense amount of potential - enough for LA to gamble on him.

Hartenstein has excellent physical tools and athleticism, allowing him to play power forward instead of center, but he still struggles to put it all together at times. He can play with his back to the basket, shoot from the perimeter, create his own offense and attack the basket off the bounce - yet is very inconsistent, often makes bad decisions and can be a bit of a ball hog. The potential is there, but he needs a lot of polishing - which is what the Spurs do best.

George Hill may leave the team in free agency (especially if Gordon Hayward leaves), Shelvin Mack is also a free agent and Utah isn't convinced Dante Exum is a true point guard. Because of that, there's a good chance they take Evans, who provides tremendous value at the end of the first round. He's small, but is a great playmaker and excellent in the pick and roll. He has the potential to develop into a starter rather quickly.

To help cut down on the load times, the 2nd Round of the Mock Draft can be found here!