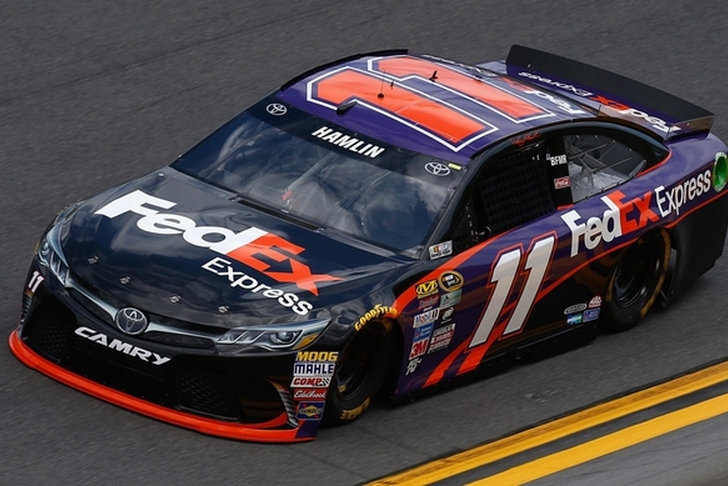 The 2016 Daytona 500 was as wild as the race has ever been, chock full of lead changes, crashes and breathtaking action.

In the end, it was Denny Hamlin who triumphed by a hair in a near photo finish -- winning the 58th incarnation of the classic American race.

How close was it? Hamlin edged Martin Truex Jr. by THIS much to bring home the win...

Hamlin dominated the race for nearly half of its 200 laps, leading for 95 and weaving in and out of first with some deft maneuvering -- off a pit row or not. However, it was Matt Kenseth who seized control late. He was seemingly untouchable over the final five laps or so, staving off charges around each turn.

Yet, it didn't last as aggressive moves by Hamlin (pushed by Kevin Harvick) and Truex Jr. knocked Kenseth off the pace and all the way back to a 12th-place finish. It was Hamlin who'd come together with Truex Jr. and give it a final nudge, notching his 27th overall Sprint Cup Series win since his debut in 2005.

This is Hamlin's first Daytona win, and fifth overall win in four seasons. Prior to that, Hamlin won four races in 2012 alone.

Here's the official Top Ten from Sunday's race, with seconds off pace in parentheses:

- 2015 Spring Cup Series winner Kyle Busch was still in recovery from a crash when last year's Daytona 500 took place. His return to the field was an impressive one, as he finished 3rd.

- Rookie Chase Elliott had the weight of the world on him in pole position sporting #24 -- the old number of the newly-retired Jeff Gordon. Elliott didn't last long at the front, spinning out early and finishing 37th overall (40 laps off).