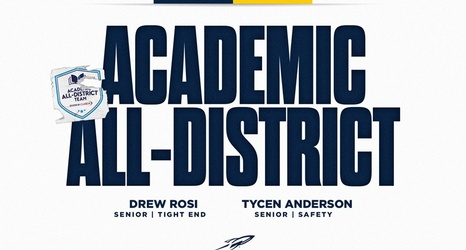 TOLEDO, Ohio – Seniors Tycen Anderson and Drew Rosi were today named to the Academic All-District 5 Team by the College Sports Information Directors of America (CoSIDA). Both players will now be on the ballot for Academic All-America, which will be announced on July 12. Toledo's last Academic All-American was Cody Thompson in 2018.

Anderson, a second-team All-MAC selection at safety in 2020, is a two-year starter who has racked up 193 tackles and 19 pass breakups in four seasons as a Rocket. A Toledo native who attended St. John's Jesuit High School, Anderson received his bachelor's degree in professional sales in the College of Business in the fall of 2020, graduating with a 3.