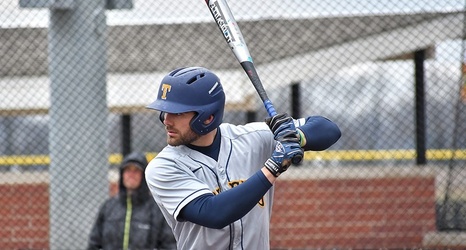 Westfield, Ind.—The Toledo baseball team split its doubleheader with Central Michigan on Sunday, winning game one, 13-1, before dropping game two, 3-2. The games were played at Grand Park in Westfield, Ind., outside of Indianapolis, due to poor weather conditions in Mount Pleasant and Toledo.

The next time the Rockets take the field will be Tuesday at home against Wright State at 3:05 p.m. A Wednesday contest at Oakland follows, then UT hosts Eastern Michigan in a Mid-American Conference series next weekend.

Toledo 13, Central Michigan 1
The Toledo offense pounded out 19 hits in the first game en route to a 13-1 victory against the Chippewas.