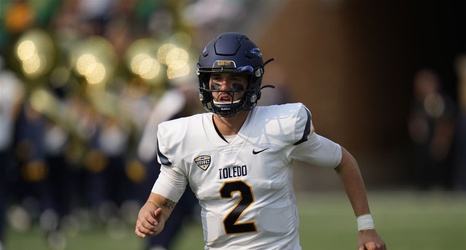 Toledo will have at least a couple more scholarships open during the current recruiting cycle.

Bradley, a sophomore, began the 2021 season as Toledo’s starting quarterback. He started the first six games, but the offense sputtered as UT went 3-3.

Head coach Jason Candle went with Dequan Finn on Oct. 16 at Central Michigan, and Bradley’s playing time all but evaporated.

“First, I would like to thank the University of Toledo along with the football program and staff that has given me an incredible opportunity for the last four years to play football,” Bradley wrote in a tweet.