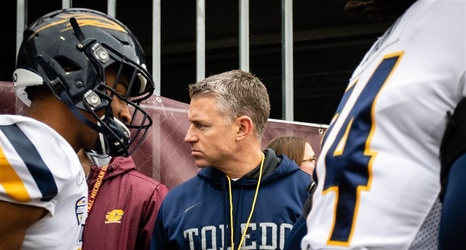 After a tumultuous regular season in which the University of Toledo football team finished last in the Mid-American Conference in total defense, Rockets coach Jason Candle made changes to the defensive coaching staff.

On Sunday morning, Candle decided to part ways with defensive coordinator Brian George and linebackers coach Mike Ward, who have been on Candle's staff at Toledo for all four of his years as head coach.

This season, Toledo was last in the MAC with 475.7 yards allowed per game and was 10th in the conference in scoring defense at 32.2 points per game.

The Rockets allowed 52 points in a loss at Ball State on Oct.